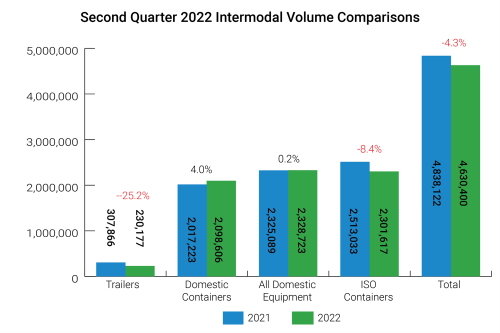 “Despite this quarter’s losses, it was an improved picture relative to the first quarter,” said Joni Casey, president and CEO of IANA. “Q2 volumes exceeded Q1 by 7.4 percent.”

The seven highest-density trade corridors, which collectively handled more than 60 percent of total volume, were all down in the second quarter. The Midwest-Northwest led the losses with a 20.1 percent decline, followed by the South Central-Southwest at 14.5 percent. The Intra-Southeast, Southeast-Southwest and Midwest-Southwest dropped 7.8, 5.5 and 5.3 percent, respectively. The Northeast-Midwest dipped 3.1 percent, and the Trans-Canada corridor held losses to 2.2 percent.

Members of the press may request the 2022 Second Quarter Intermodal Quarterly report from Art Cleaver at acleaver@intermodal.org.