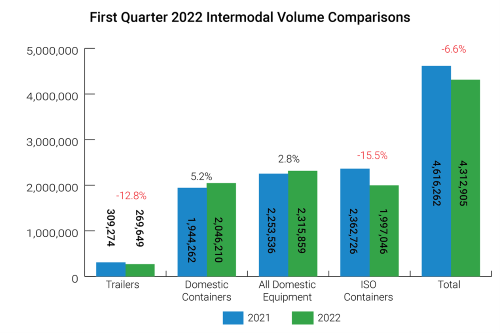 “Supply chain issues continued to impact volumes in the first quarter, especially on the international side,” said Joni Casey, president and CEO of IANA. “On the other hand, domestic containers stood out for a respectable year-over-year gain. Higher levels of transloading are primarily responsible for this trend.”

The seven highest-density trade corridors, which collectively handled more than 60 percent of total volume, were all down in the first quarter. The South Central-Southwest, with a 15.3 percent deficit, led the losses, followed by the Intra-Southeast and Trans-Canada corridors at 14.6 percent and 13.4 percent, respectively. Also dropping in the first quarter: Midwest-Southwest, 8.7 percent; Midwest-Northwest, 7.3 percent, and the Northeast-Midwest, 2.5 percent. The Southeast-Southwest held losses to 0.8 percent.

Members of the press may request the 2022 First Quarter Intermodal Quarterly report from Art Cleaver at acleaver@intermodal.org.