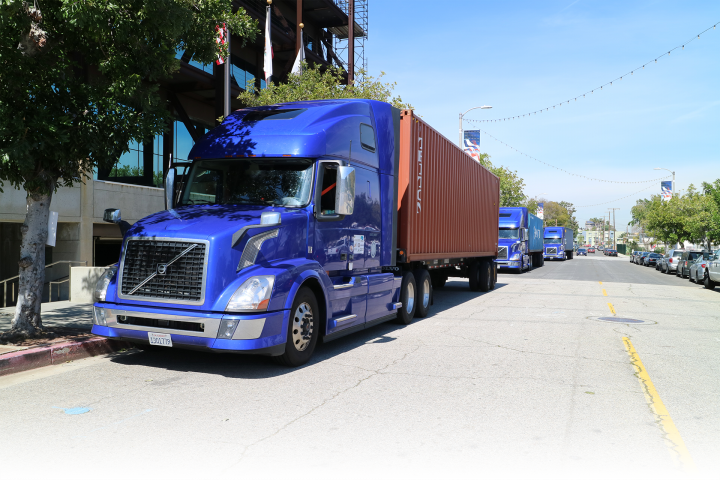 The anticipated emergence of truck platooning in the months ahead could create opportunities for intermodal in terms of lower operating costs and operating efficiency.

Richard Bishop, principal at Bishop Consulting, whose expertise is truck technology, believes that later this year or early in 2019 multiple providers will introduce what is known as Level 1 Driver-Assistive Truck Platooning, or DATP. That means two tractors operating with automated throttle and brakes while both drivers are steering and monitoring road conditions.

"The benefits from platooning are cumulative ­— you get the fuel savings for each mile traveled in close following mode, so benefits can be gained with the typically shorter freight hauls in intermodal operations," said Bishop.

"I’ve talked to intermodal companies who have many routes with high highway usage and regular loads so that dispatching two vehicles together for platooning is very viable," Bishop said.

"Pairing two trucks could be very helpful for intermodal," said Mike Roeth, executive director at the North American Council for Freight Efficiency. "Early adopters will be fleets that have multiple trucks traveling the same routes."

Tests done for the council, which includes motor carriers and original equipment manufacturers, have identified fuel savings of 4.5 percent or more, which can be significant because fuel is either the largest single expense for motor carriers or the second largest, topped only by wages and benefits.

Steve Boyd, co-founder of technology company Peloton, said the company has had discussions with unidentified intermodal rail companies that have shown an interest in making use of truck platooning in their intermodal operations.

"DATP is a good fit for intermodal operations with predominantly highway miles plus freight runs in which multiple platooning equipped vehicles are on a route in the same timeframe," Boyd said, "whenever there is a high volume of intermodal trucks at a port or rail terminal."

Roeth highlighted the opportunities for moves between ports and inland terminals using either two or more of the same company’s trucks or a combination of motor carriers who might be willing to cooperate to obtain savings.

Boyd also said the DATP technology can be done for inter-fleet operations, using a cloud intermediary.

One possible approach would be to create a platooning service provider to match up pre-certified fleets that have other platoon-capable trucks on the same road at the same time, Bishop said.

While these experts noted the potential advantages of platooning, specific effects on intermodal aren’t yet known.

intermodal, which was done last year at the Port of Los Angeles in conjunction with the University of California – Berkeley. Steve Shladover, a Berkeley research engineer, told Intermodal Insights that the runs didn’t produce any measurable results of possible benefits because they were demonstrations rather than scientific tests.

Neither the university nor the port have plans to specifically test intermodal platooning runs, he said. The university’s efforts now are focused on testing the benefits of platooning on urban arterial streets, which once complete could provide some clues about intermodal-related fuel benefits.

Tests of platooning so far have been done in an over-the-road setting, with highway runs at speeds of 55 mph or so in several states. One notable, and successful, test was done in Colorado with two vehicles hauling beer.

Deputy Chief Mark Savage of the Colorado State Patrol told Insights that the state has made an agreement with Peloton Technologies, which will do platooning on highways in the state.

"We feel pretty comfortable that the platooning with two trucks can be done safely," he said. He did, however, express safety concerns about drivers who cut in between the platooned trucks. If that happens, he said, the platooning technology will have to be disengaged and the second truck’s driver will have to take control of the vehicle.

Savage said platooning could have potential for intermodal operations when the trucks start from the same location and travel the same route.

Late last year, Peloton and the state conducted a 1,000-mile platooning demonstration on Florida’s Turnpike. A final report on that project is still being compiled by Florida’s Department of Transportation.

University of California – Berkeley last year conducted tests with Transport Canada, that country’s counterpart to the USDOT, at highway speeds. Those tests found fuel savings were 13 percent on average for three trucks when trucks were a total of about 15 feet apart, and 4.5 percent for three trucks on the same basis when the separation was approximately 300 feet.

A four-mile long closed track was used for the Canadian tests. Keith

"Platooning provides the greatest benefits as distances increase and loads (trucks) can be combined to travel together," he said. "Intermodal operations are generally complex and vary greatly, but are typically short hauls, like ports to distribution centers, which lessens the benefits of platooning. Benefits are relative to the length of the run and logistics coordination between hubs or stops."

Roeth said aerodynamic issues such as container shape and lack of side skirts on chassis could limit those benefits.

The broad topic of automated truck technology as it relates to intermodal becomes noticeably more complicated beyond a shorter-haul setting for platooning of two trucks. Rail consultant Anthony Hatch outlined a variety of effects from automated vehicles to railroads in general and intermodal.

One fact is apparent, he noted in a presentation that evaluated how automated vehicle technology would affect the rail industry. He concluded that there were a wide variety of factors that could affect the rails. There is widespread investment in truck technology, whether the subject is automated, such as platooning, or electric trucks, by truck manufacturers and technology companies.

Hatch said, "Rails are in the best financial and network condition in the industry’s long history," which will enable those carriers to make similar investments when they choose to do so

Those strengths are coupled with stated commitments across the rail industry to boost spending on technology while increasing reliability, visibility and network velocity.

Another potential effect is related to labor. It can take just 10 train crew members to move as many as 300 containers between Los Angeles and Chicago compared to 300 drivers today. Even if platooning cuts the number of drivers need for that run, there still could be a rail cost advantage, he noted.

Intermodal’s advantage is multiplied by the driver shortage, he added, as customers and motor carriers turn to rail service because of staffing issues and rising driver pay costs.

On the other hand, the fuel and driver expense savings from platooning or electric vehicles could eventually limit or eliminate the railroads’ intermodal advantage of lower costs over some distances, Hatch said.

Shladover believes that intermodal’s overall benefits from lower personnel and fuel expenses will still prevail compared with OTR service for longer distances, such as 2,000-mile runs. The platooning benefits will be concentrated more on middle distance trips, such as 500 miles, he said, because intermodal’s advantages become greater over those longer runs.

In a presentation, Hatch noted there have been a wide variety of estimates of potential effects on rail traffic from automated technology and/or vehicles in OTR use. OTR motor carriers also enjoy traditional advantages in service and consistency, a more expansive freight network and single source, direct contact with customers, which can be enhanced through autonomous truck technology, Hatch noted.

Because the concept of automated technology is so new, there are no known actual, published studies of intermodal’s overall cost advantages when truck platooning or other advanced highway vehicle electronics are in use.

What is known is that the current tests being conducted are focused on so-called Level 1 platooning, which includes active driver participation on both vehicles. As platooning evolves, it could eventually reach what is known as Level 5, as defined by the Society of Automotive Engineers, in which a truck would be fully autonomous and wouldn’t have a driver.

The rise of platooning comes as trucking companies continue to evaluate a variety of other steps to save fuel.

In addition, vehicle manufacturer Tesla has stated its intention to build a Class 8 electric truck for heavy-duty use. So have Orange EV and Nikola One, two other manufacturers. Published reports also indicate that other heavy-duty truck manufacturers, such as Peterbilt, are evaluating electric vehicle production.

Boyd and others also cited a broader platooning benefit that extends beyond intermodal, and trucking in general.

"The reduction in fuel usage enables DATP-equipped trucking operations, including those run by or contracted with rail and intermodal players, to operate more efficiently," he said. "These benefits ripple through the entire supply chain."