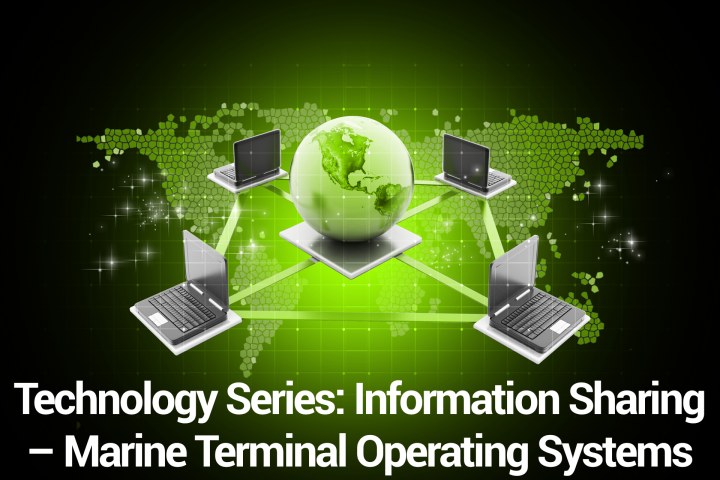 "Using technology to automate the transfer of information will not only help the customers make better decisions about their cargo, but the terminals can plan better in advance as well."
Susan Gardner
Navis LLC

Marine industry technology has been advancing in recent years to include efficiencies from automation and other applications. Progressions like tracking technology, automatization and smart phone apps have helped the industry become more efficient and also more transparent.

But although much progress has been made over the years, what more can and needs to be done to strengthen that technology and to apply it to other intermodal sectors?

For starters, according to Susan Gardner, a vice president and GM with operational technologies and services provider Navis LLC, greater development of information sharing technology.

"Customers want as much information as early as possible related to their cargo.

Traditionally this has required a lot of emails and phone calls," she said. "However, using technology to automate the transfer of information will not only help the customers make better decisions about their cargo, but the terminals can plan better in advance as well instead of having to make numerous last-minute changes to yard and rail plans as it relates to intermodal."

"The supply chain runs on information. All stakeholders need access to data to perform their respective roles and ensure the efficient movement of cargo throughout the supply chain," he explained. "From the perspective of a TOS provider, the key benefits of sharing information include the ability to improve operational efficiency, enhance worker safety and enrich communication between the terminal, its customers and stakeholders."

However, he cautioned that the availability of large quantities of data does not in itself constitute business intelligence or lead to better decision making.

"The data need to be transformed such that they provide both context and value to the business users who consume them, and they need to be accessible via a robust data platform which supports both historical and real-time analysis," Bauer said. "This is the approach Tideworks has taken with the development of its data platform, which gives terminal operators visibility into transformed TOS data as well as the ability to incorporate other data sets to gain a holistic view of their operations."

Port of Virginia spokesman Joe Harris, whose specialty is in terminal automation and robotics, also said that greater information sharing is part of the future of the industry.

"We think that as we start to go forward, we are going to start to develop a closer relationship that not only tracks the truck itself, but the person driving the truck and possibly even use some of those same communications mechanisms to implement a paperless gate so people can come in and have the details of their mission on their phones — they don’t have to have a bunch of paperwork — and provide more timely updates about congestion and delays and that kind of thing," he said.

Although technology use is on the rise at terminals, its role is still a developing one. One question is how data from terminal operating systems can improve key intermodal areas of attention such as maintenance, operations and safety.

"One of the key benefits of data gathered from a TOS solution is in the increased safety at terminals," Bauer said. "Terminals are very dangerous environments with large equipment, trucks and heavy goods moving quickly. With the help of automation at the gate and in the yard, workers can move out of the dangerous gate lanes allowing them to control and monitor operations in a safer, office environment."

Maintenance is another area, he said, where data visibility and automation can offer improvements and better inform decision-making.

"For example," he remarked, "crane monitoring systems and equipment telematics, either as independent systems or by surfacing data through the TOS, have the ability to notify management and equipment operators of potential maintenance issues allowing real-time decisions to avoid downtime or damage."

"The speed at which the information from the marine terminals is communicated to the intermodal terminals is key in helping them plan when they can take machines out for maintenance and how much labor and equipment need to be ordered on any given day," she explained. "It can also help in ensuring congestion is reduced at the intermodal facilities which is a key element in maintaining a safe working environment."

"Ship delays usually result in added pressure on the marine terminals to expedite the rail cargo off the vessel to make the intended train, to have full visibility of inbound cargo from the intermodal facilities and to plan their yard in a way to maximize the loading and offloading of the train especially when there are tight timelines," she said.

The roles of automation, robotics and other more advanced technology, like artificial intelligence, in port settings are still developing and growing, experts told Intermodal Insights.

"The role for all of these elements is evolving and what works in one location isn't necessarily what will work or will increase efficiency in other locations," Gardner said.

"We have worked on developing proven automation and semi automation technology for terminal operations over the last 20 years, and this continues to evolve.

"Deciding to implement semi automation or full automation takes the full commitment from all parties involved and the return on investment is a key deciding factor whether to proceed or not," she continued. "The role of AI in the future is going to be important. As more and more of our customers want proactive decision-making being done in the terminal operating system, this will be a heavy focus area going forward."

Despite the intermodal industry’s relatively slow adoption compared to others, Bauer said, automation is becoming a reality at more and more terminals "due to continued pressure on terminal operators to do more with less, as well as the evolution and improvements" of supporting technologies.

"Although the role and level of automation will vary depending on a terminal’s size, location, operating rules and customer demands, overall, automation is empowering terminals to improve operations and enhance customer service levels by minimizing costly errors and optimizing the utilization of assets, while providing full visibility into operational data that allows them to make data-driven, real-time decisions," he said.

"Advanced technologies such as AI and its companion, machine learning, also have a place in our industry and can further improve the flexibility, responsiveness and scalability of intermodal terminal operations," Bauer stated. "For example, when integrated into the TOS, these technologies can optimize container and equipment tracking by analyzing historical patterns and real-time data to inform decision making. The intelligence of these systems allows operators to anticipate and capitalize on potential efficiencies through algorithms and computerized data analysis. These data can then be shared with customers, so they have insight into the location and status of their cargo at any given point in the supply chain."

Since terminals are both unique and complex, the ability to improve visibility and control over the huge number of simultaneously moving parts, while also integrating information from third-party technologies and other business-critical systems, can improve overall operational efficiency, Bauer said, and result in a faster flow of goods in and out of terminals.

Thomas Graef, a ports and intermodal products manager with Kalmar USA said there’s a misconception is that if a terminal’s automated, there’s no humans involved at all. But that isn’t the case, he said.

"There’s still a lot of monitoring systems, monitoring cranes, they’re there for maintenance reasons and for operational reasons," Graef remarked, adding that despite the mixture of man and machine in the same setting, automation brings a much higher degree of safety.

"If you have an automation accident, 90% of the time, there will not be any humans even involved. So, it increases safety," he said. "I see it as a safer environment."

Harris agrees, but added that it’s the lack of interaction between humans and non-humans in the work area that helps to keep the person-involved accident rate down.

"The primary role that we always talk about is we look to make the whole logistics chain safer with automation," he said. "Generally speaking, container terminals can be dangerous places; safety is always a concern and a focus. When automation is applied, most of the time that moves people out from an area where they’re in the vicinity of a potentially harmful situation."

Jean-Paul Rodrigue, a professor with Hofstra University’s Department of Global Studies and Geography, said that today’s automation is still not at the point where it has completely matured.

"It’s tough to measure, but people were expecting a 25-50% improvement in efficiency, but are getting 10-15%. This means that automation is still not mature, it’s not a proven technology, we’re still somewhat in the experimentation phase. We’re about to come up with systems that are better, more affordable, more efficient. And when this happens, I suspect a lot of ports are going to start to look at this a lot more comprehensively than now."

Currently, smaller ports don’t benefit much from automation, he said.

"It doesn’t seem at this point in time that automatization makes that much of a value proposition for smaller terminals because of the capital investment," Rodrigue said. "At the end, you don’t see that much benefit because you don’t have that much traffic. It’s not going to make that much of a difference."

"It’s going to get there eventually," he added. "In a few years when all the technology’s proven and the costs are going down (and) the AI coming in is more efficient. I would say in 10-15 years we’re going to see a very significant stransition."