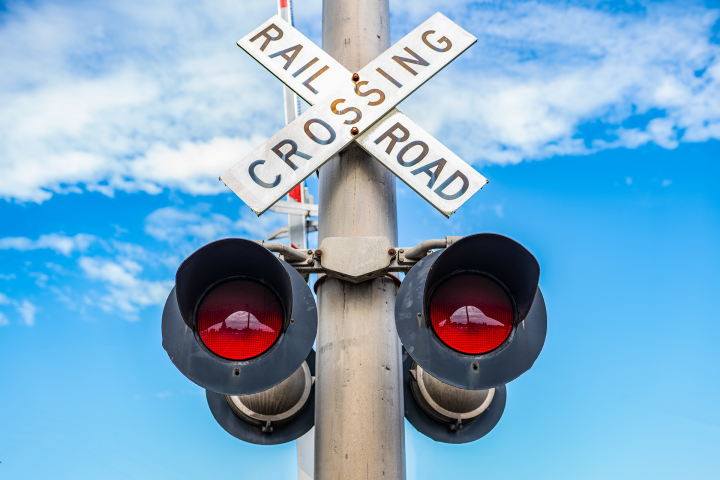 A motorist is almost 20 times more likely to die in a crash involving a train than one involving another motor vehicle. And part of the reason why is non-observance of proper rail crossing safety.

In fact, statistics from the Federal Railroad Administration show that over the course of nearly the last full decade — from 2009 to the end of July, 2019 — there have been almost 22,000 highway vehicle-rail incidents resulting in 9,430 injuries and 2,645 fatalities.

So, what can be done to cut down on these statistics? Among the keys for motorists, particularly commercial drivers, is to give their full attention to the task at hand — driving — and not to become distracted. Intermodal drivers should also not try to outrace trains, no matter how much of a hurry they may be in.

Drivers should also familiarize themselves with signage at and near rail crossings, safety experts say, including blue-and-white emergency notification signs.

"For the most part, most grade crossing incidents happen when vehicles simply do not stop, or when they stop on the crossing. And it’s frustrating because these are fairly simple mistakes not to make," Will Miller, an Atlanta-based public safety director with Norfolk Southern said. "I don’t think there’s any doubt that as time has progressed, and as technology has become more of most people’s lives, distracted driving could play a role in some of the trends. But if there’s ever a time not to be distracted by anything and give your full attention to the vehicle that you’re operating, it’s when you’re approaching or crossing a railroad crossing."

FRA data show that through the first seven months of 2019, there were 1,254 crossing incidents; of those, 185 involved a tractor trailer, which is about 16% of all incidents so far this year.

"That is of importance to the intermodal industry and anybody who’s participating in the economy at large," Miller said. "Anyone who’s shipping anything by truck should be alarmed by that statistic and interested in knowing how they can reverse that trend."

What’s more alarming is that data show that in the aforementioned incidents, almost 60% were at crossings that have automatic warning lights, gates and/or bells.

"Often one of the arguments that we hear are if every crossing has lights, gates and bells, there would be no more incidents. This statistic is in full contrast of that notion," Miller said. "It doesn’t matter what type of warning device you have at a crossing, if the driver doesn’t obey it and follow the law, then they’re putting themselves at risk."

Miller said that data show that there’s a spike in incidents during certain parts of the workday.

"It kind of starts at 10 am and then it dips down a little bit," he explained. "Then from 1 pm to 3 pm, you also see another heightened time period of these types of incidents."

Almost every incident, he said, is the result of a bad decision on the part of the motorist, particularly drivers of automobiles and light trucks. Miller and Knight, however, both credit the non-profit Washington, D.C.-based educational group Operation Lifesaver for getting messages out to people to help improve safety and reduce accidents along the rail network.

“If there’s ever a time not to be distracted by anything and give your full attention to the vehicle that you’re operating, it’s when you’re approaching a railroad crossing.”
Will Miller
Norfolk Southern

"Some of the things they’re focused on are things like the emergency notification signs that are at every crossing in the United States. These blue and white signs, we want people to know where they’re located and how to use them if there’s any type of incident that should be reported at a crossing. Those signs are in place to help freight-vehicle incidents from occurring before they occur. If a truck is stuck on the tracks, they need to call the number on that sign at once and report it and try to give the railroad companies every second and minute available to stop a train."

Miller said it’s important for drivers to be familiar with other signage at and near railway crossings, as well.

Knight said that Kansas City Southern goes so far as to hold "awareness functions" at its terminals in line with Operation Lifesaver.

"Our events are a combination of driver appreciation and information sharing with drivers regarding crossings," he explained.

But Miller added that no matter the type and amount of safety outreach that’s performed, preventing rail crossing accidents is literally in the hands of drivers.