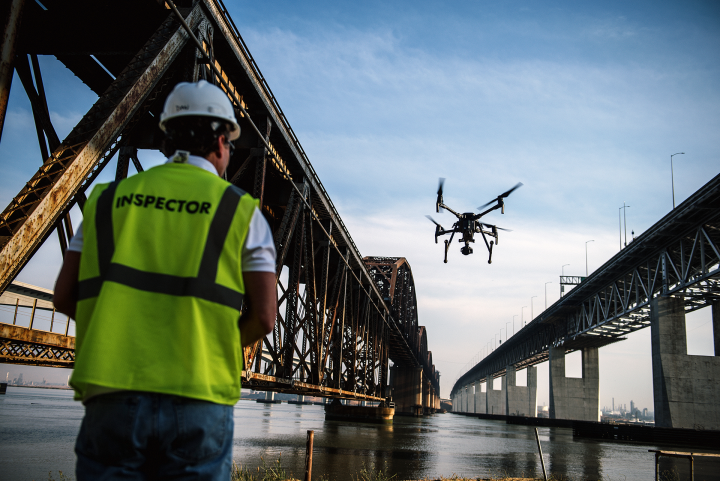 Over the years, rail terminals have been the location of intensive efforts by freight carrier and terminal operators to improve intermodal safety. There’s no denying that the rail industry has moved onward and upward in recent years, thanks in part to high-tech improvements and their implementation by forward-thinking businesses.

Federal Railroad Administration data show that the total number of train accidents – commercial and passenger – fell 5.1 percent between 2015 and 2018. Also, the number of fatalities in those accidents was down 27.3 percent.

Although those numbers represent strong improvements, some believe that terminals’ safety and security can be even further improved with the aid of technological advancements.

Although there’s more work to be done, recent years have seen a number of technologies emerge that help enhance existing safety measures.

"Over the past several years, we’ve seen the digitalization of the operating environment and automation providing the platform to implement and integrate with various systems that enhance terminal and worker safety," Todd Tatterson, vice president of business development for software company Tideworks Technology, said.

These systems, he said, include collision avoidance systems, seat belt monitoring technology, remote crane operations and safety halos which create operational buffers around people, among others.

"Additionally," he said, "gate automation developments at many intermodal facilities have facilitated getting terminal staff out of dangerous gate lanes, while simultaneously improving driver safety with the use of mobile phone apps and virtual exception management tools geared toward keeping drivers in their cabs."

In automated and semi-automated yard environments, there’s also been an emergence of improved driver safety in the transfer lanes, whereby yard cranes won’t perform the container lift unless the driver is activating a sensor, Tatterson added.

"These are all extremely positive safety enhancements, and digitalization and automation are providing the launching pad for continuous improvement," he said.

Another important advancement in recent years, Kansas City Southern Railway spokeswoman Doniele Carlson said, is the adoption of Global Positioning Systems. "For terminal operations, our bridge cranes utilize GPS to keep the cranes operating on crane paths and to allow the operators to focus on lifting containers and loading trucks and rail cars rather than steering the crane parallel to the tracks," she explained.

In addition to the above, most Class I railroads, such as Canadian National, Union Pacific and CSX, have in place safety programs aimed at preventing incidents, both at terminals and with the public. All Class I railroads also use some sort of automated technology for inspections to supplement the manual inspections required by federal regulation.

In the years to come, next generation technology is expected to help railroads be able to conduct safety inspections more frequently, detect more flaws more reliably and respond more quickly while keeping workers out of harm’s way, according to the Association of American Railroads.

The railroad industry spent record levels of funding on capital improvements and maintenance over the last five years and more than $25 billion annually on average, according to the Association of American Railroads. And the work has paid off: the AAR also says that rail safety data for 2017, the most recent year for which full numbers are available, shows that recent years have been the safest on record for the rail sector.

The work, however, is still in progress. What more needs to be done to both improve safety and aid productivity? There are several things that are either currently emerging in the industry or are on the horizon that can help.

"Collectively as an industry we should always be looking for ways to improve safety."
Todd Tatterson
Tideworks Technology

One trend that could gain momentum, and deliver on their promise, Carlson said, is greater utilization of digital tools throughout the rail ecosystem. "Paperless gate activity can reduce dwell time on entering/exiting the intermodal terminal by sending all current paper information to the driver via an in-cab console or mobile app," she said. 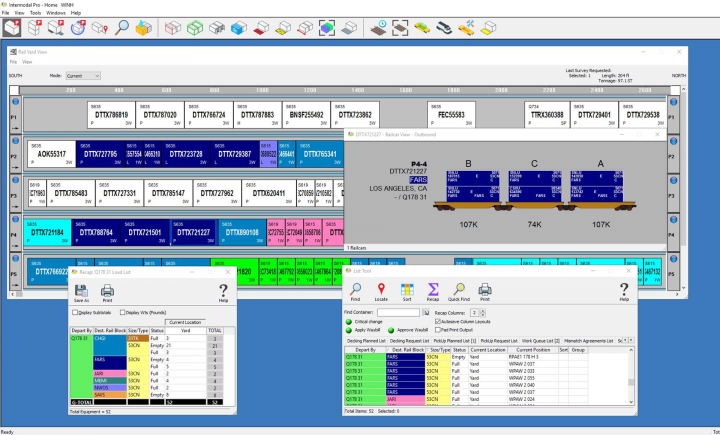 Another trend gaining momentum that Tatterson mentioned is better business integration between rail facilities and the supply chain communities that they’re a part of. "We have seen in recent years a steadfast commitment from rail terminal operators to continuously improve service of the trucking communities; i.e., to enhance the driver experience and safety while on the terminal and reduce overall truck turn times," he said.

"There are many exciting developments outside of our industry. . . which will likely have applicability within the rail terminal environment in the near future and could potentially provide significant safety improvements."
Tatterson

"You’ll know exactly where everything is at all points in time and what it’s doing," he said. "It’ll give you better situational awareness to eliminate inefficiencies."

So, are there specific safety practices from outside the rail industry – either inside or outside transport – that could be put into practice at rail terminals?

One possibility, Carlson said, is dray carrier valet parking, a concept that allows dray carriers to drop their inbound load in a lot near the gate house. "This can improve train-loading operations," she said.

Under dray carrier valet parking, with advance notice of their arrival, the pick-up from the terminal would be placed adjacent to their inbound load drop-off, eliminating the traffic inside the terminal to only those people familiar with the operations, she said. It would also assist the terminal in planning inbound arrivals, since the dray carrier would provide advance notice.

Tatterson said that since intermodal terminals are "inherently dangerous" environments, the industry should always collectively be looking for ways to improve safety.

"There are many exciting developments outside of our industry, such as the automation we’re seeing in the vehicle industry with autonomous vehicles, which will likely have applicability within the rail terminal environment in the near future and could potentially provide significant safety improvements," he said.

"Tideworks," he remarked, "is eager to see how the industry will continue to evolve and to play our role in ensuring these advancements are integrated into a holistic technology landscape for safer rail terminals."

Although safety is improving at terminals throughout North America, there are still lessons that can be learned. And some have looked to Europe and elsewhere overseas for inspiration. 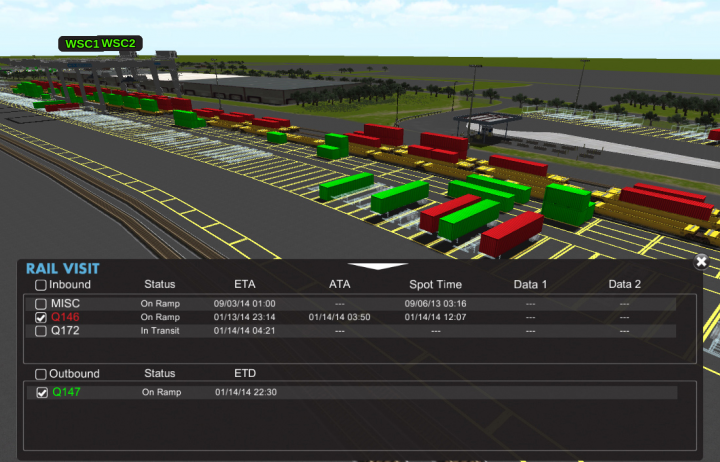 Several years ago, Tideworks developed something called "Live Lift" within its intermodal terminal operating system in Europe. The system enables a terminal to load a container from an over-the-road truck directly to rail, without the intermediate steps – and additional handlings – associated with truck to yard and then yard to rail.

"This saves resources and time for the operator and allows the truck driver to leave with his wheels without having to wait for lifting equipment to deck his container," Tatterson said.

The system became so popular overseas that Tideworks’ U.S. rail customers began adopting it as well.

Carlson said that there are also lessons that can be learned from overseas ports, particularly the use of automated systems. Since machines and computers tend to make fewer mistakes than humans, automation can theoretically help improve safety.

"Computer systems designed to optimize movements within the terminal are welcome," she said.

"From the port environment, we can learn about yard management and automation," she said. "Ports throughout the world have implemented crane operating technology to load and off-load vessels faster through autonomous operations which make decisions and solve problems faster than human operators."

According to the AAR, as railroads gather more data through next generation inspection technology and refine the software capable of analyzing it, the ability to enhance safety and maximize the efficiency of operations will increase.

"Advanced algorithms and data analysis software will enable railroads to harness the massive amounts of data being collected nationwide to enhance safety, reliability and service to customers," the AAR said in a statement. "Next generation automation technology will continue to reduce the impact of human error and human limitations on railroad operations, improving safety and efficiency."

Looking toward the future, the railroad association said, federal regulations must both permit and encourage railroads to continue to develop and deploy these vital technologies, because they benefit not only North American businesses, but also the global economy as a whole.

"I think we’re in a very interesting time right now in intermodal operations," Diebes said. "We’ve been doing it one way for a very long time, and what I’m seeing is all the railroads are now looking to completely change -- especially now that intermodal is the growth engine for most roads -- and think about how you get ahead of capacity constraints and how do you leverage technology to do that."

"It’s a very exciting time for operational advancements," he said. "We’re going to see a lot more change than we’ve ever seen in intermodal operations over the next five years."