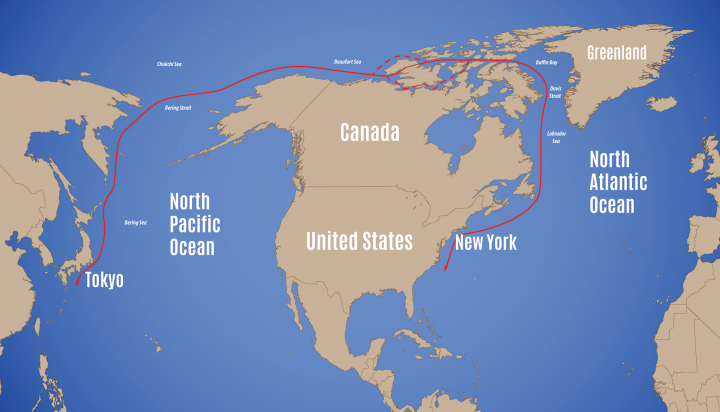 Cargo shipping on the Northern Sea Routes through the Arctic poses no significant threat — at least for now—to North American intermodal as operators have their hands full with daily challenges posed by economic uncertainty and the COVID-19 pandemic.

The prospect of using Arctic waters for international freight has come into focus recently as a result of melting ice, enabling ships to travel on two shorter distance routes between Asia and both North America and Europe during the few months when its passage isn’t blocked. The Northern Sea Route can be as much as 40% shorter than existing routes, according to global freight forwarder DHL.

To date, there has been very little vessel traffic on the Arctic route between Asia and North America, based on facts provided by Transport Canada. Last year, just five vessels of all types made a complete transit via the Northern Sea Route between Asia and North America through that nation. By comparison, a combined total of 32,665 trips were made by all types of ships through the Panama and Suez Canals, the government agency told Intermodal Insights. On the Asia-Europe Northern Sea Route through the Arctic, limited transits are made over portions of the route by vessels carrying liquefied natural gas, but not containers.

"I don't see the Arctic route freight being large enough to materially move the number of [container] loads from any existing trade lane," said FTR Intel Vice President Todd Tranausky. The only potential, eventual impact could be on North American transcontinental lanes because the Northern Sea Route between Asia and destinations in the U.S./Canada is shorter, compared with cargo moving through the Panama and Suez Canals, with the potential to affect transcontinental freight as vessel arrivals switch between East and West Coast ports. There would be no effect on established routes between the U.S. West Coast and inland destinations such as the Midwest, Tranausky said.

The growth opportunities are limited by a combination of economic, environmental and navigational questions that must be addressed.

A.P. Moller-Maersk’s Maersk Line, CMA CGM, Hapag Lloyd and others have announced they won’t route cargo through the Arctic.

"A.P. Moller-Maersk wants to manifest itself as a sustainability leader in transport and logistics, and we are very concerned about the global consequences of climate change," spokesman Mikkel Elbek Linnet told Insights. "The world is increasingly seeing the severe consequences of rising CO2 levels in the atmosphere. Ice melting in the Arctic is an example of this. We fully recognise the environmental challenges from sailing on the Northern Sea Route. Maersk will always seek to minimize the negative impact on the environment of our operations. We have no plans to pursue the Northern Sea Route."

"We make these choices to meet the needs of our employees and our customers, who are increasingly concerned about the environment. But above all, we make these decisions for the future, to leave our children a cleaner planet," CMA CGM Group Chairman Rodolphe Saadé said in a statement, citing the potential damage from accidents, oil spills and injuries to marine wildlife. "These are brave, bold choices, which go far beyond purely business decisions."

"Many shipping companies have re-evaluated the environmental impact of their operations," he said. "The risks from a brand perspective are too great to see widespread demand for it. Brands are ever more being judged by their social conscience in a host of ways, but the biggest is still environmental. I don't see BCOs lining up to have their cargo on an Arctic route ship because of that."

"The waterways that make up the Northwest Passage are unlikely to offer a commercially viable trans-polar shipping alternative in the short to medium term," Rivet said. "Global shipping depends on set schedules, and the likelihood of delays due to poor visibility, changing ice conditions, and the uncertain length of the shipping window presents risks to ship and cargo owners and ultimately affects a critical element of the shipping industry—predictability," Rivet said.

"The Northwest Passage is only geographically shorter [vis a vis the Panama or Suez Canals] when pairing certain ports along the Eastern Seaboard with certain ports along the Asian Continent. This perceived advantage must also consider other equally significant considerations, including reduced vessel speeds, shallow water, impacts of high latitudes on communication quality, the need for additional crew training requirements, and whether the construction and equipment costs for operating in the region make economic sense given the short operating season."

Freight forwarders DHL and Kuehne+Nagel have different views of the routes.

"It is too early to say how the exact economic and operational landscape will look, but DHL Supply Chain will continue to monitor developments closely for our customers," said DHL spokesman Dan McGrath. "The nature of modern supply chains is that any route that can reduce the transit time between the three major markets of Asia, Europe and North America will reduce costs of transportation as well as inventory carrying costs. Current estimates are that transit times from East Asia to Europe can be reduced by as much as 12 days and shipping to the East Coast of the U.S. can be reduced by four days. This is an enormous improvement and could dramatically shift shipping patterns as a result."

Shortening major routes by 20% to 40% would reduce emissions and could shift freight from less efficient air transportation to ocean, McGrath said, while emphasizing that those factors must be weighed against the potential negative effect of operating in the Arctic region. Factors to be addressed before proceeding include regulatory and environmental considerations, operational issues and the cargo port infrastructure on Northern routes, McGrath said.

"It is too early to say how the exact economic and operational landscape will look, but DHL Supply Chain will continue to monitor developments closely for our customers."
Dan McGrath
DHL

Potential cargo diversions to the Northern Sea Route could shift some Asian cargo from West Coast to East Coast ports, he said, though generally the threat to intermodal isn’t serious due to capacity limitations on Arctic transits. Arctic shipping isn’t expected to generate sufficient transit savings to compete with Asia-Europe intermodal options, he said.

"Even though the Arctic routes potentially shorten the time between major trading markets, the increased shipping traffic is a risk to the Arctic ecosystem," Kuehne+Nagel spokeswoman Dominique Nadelhofer said. The company has pledged not to use the route as part of a broader effort to address the CO2 footprint of its airline, shipping and land freight providers. The forwarder’s goal is to be carbon neutral by 2030.

There have been a handful of successful, publicized transits between continents.

Two years ago, the 3,600 TEU Venta Maersk made a safe trial voyage on the Northern Sea Route between Vladivostok, Russia and Bremerhaven, Germany, a 37-day trip to test vessel systems in ice situations. After that trip, Maersk determined that the Northern Sea Route is not a commercially viable alternative to current routes, according to Linnet. COSCO’s Tian Xi traveled the Northern Sea Route from Helsinki, Finland to Qingdao, China, carrying paper pulp. Chinese state media’s report said the partnership between the ocean carrier and Shandong Port Group was intended to illustrate the business opportunities that could be realized.

Transport Canada’s Rivet also explained how the Arctic shipping route is essential to the nation, because sea routes that cover part of the full Northern Sea Route are used for vital resupply.

"The summer Arctic sealift [cargo vessels, tankers, tugs and barges] is responsible for delivering necessities to landlocked Arctic coastal communities like nonperishable food, fuel and construction supplies," he said. "The trend of decreasing sea ice thickness and cover, and the corresponding lengthening of the summer navigation season in Canada’s Arctic waters, is resulting in an increased number of ships of all types. An average of approximately 175 unique ships per year conducting an average of 400 voyages."

Any cargo vessel that intends to travel the entire Northern Sea Route though Canadian waters will have to give 60 days’ notice. Vessels carrying more than 12 passengers and crew won’t be allowed in Arctic coastal waters until Oct. 31, Rivet said, so that the Canadian Coast Guard can "focus efforts on essential operations, including community resupply, ice-breaking, environmental response and search and rescue" in a region that has limited health care capabilities to cope with an outbreak of COVID-19.

"Global shipping depends on set schedules, and the likelihood of delays due to poor visibility, changing ice conditions and the uncertain length of the shipping window presents risks to ship and cargo owners and ultimately affects a critical element of the shipping industry—predictability."
Simon Rivet
Transport Canada

Others told Insights they aren’t involved in the Northern Sea Route now.