INTERMODAL IN MEXICO AND CANADA — A STATUS UPDATE 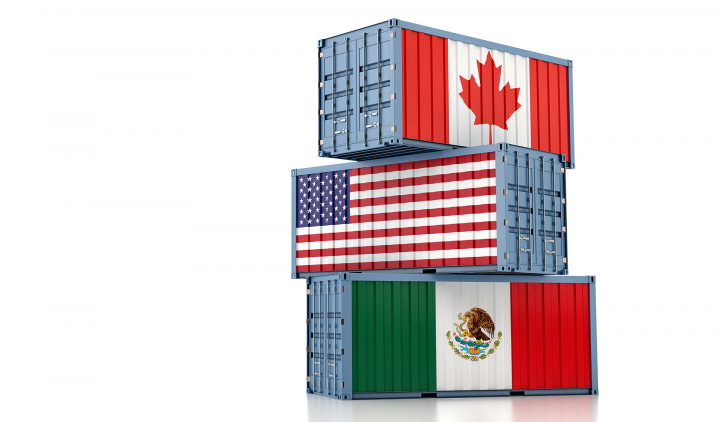 Intermodal in Mexico and Canada – A Status Update

The United States may be the busiest country in North America when it comes to intermodal container traffic, but Canada and Mexico also have dynamic intermodal industries.

For an update on the status of the industry in those two countries, Intermodal Insights turned to a number of experts throughout North America for their perspectives.

"If the end consumer is in the U.S., Canada or Mexico, manufacturing in one of these countries enables delivery to the end customer faster and with less risk of disruption," he explained.

"With Mexico continuing to export so many goods to the U.S., capacity shortages and border congestion are always possible. Intermodal is the solution to those potential problems," he added. "Trucks must wait in lines and clear customs at the border, while intermodal can clear at origin or even in transit and cross on the rail. This creates a more efficient customs and border crossing process for the shipper."

Jonathan Wahba, vice-president, sales and marketing intermodal and automotive for Canadian Pacific Railway, said that the COVID-19 pandemic has created a policy advantage for intermodal, as the pandemic has resulted in a reduction in, and more attention paid to, the number of commercial drivers traversing North American borders.

"The auto industry could adopt more opportunities to stage inventory of parts in Mexico for manufacturing, allowing a longer transit cycle, creating more opportunity to ship southbound by intermodal over truck," he explained. "Streamlining the customs process within Mexico for intermodal traffic, allowing for seamless movement of units into and out of rail facilities will also help transit time issues."

Diego Anchustegui, spokesman, Transportes EASO, said that one of the major factors that influences cross-border intermodal traffic – both rail and truck — is the trade imbalance between the U.S. and Mexico.

"In my opinion, there is a big benefit with intermodal over OTR; it is cheaper to bring down an empty container than an empty trailer," he said. "There is also a big influence with the opening of new lanes through the different railroad companies. The growth in intermodal is based on the opening on new lanes from KCS and BNSF."

Francisco Estrada, intermodal director — Mexico division, Swift Transportation, said another factor is that Mexico has transitioned from a simple assembler of products to what he called "an exceedingly sophisticated" manufacturer.

"Our country’s government has aggressively sought free trade agreements with other nations to foster growth. Mexico now has such agreements with 44 countries, and some type of free trade policy affects 90 percent of our trade," he explained.

"Sourcing product from Mexico can be especially advantageous for North American businesses," he continued. "Product originating in Mexico can reach North American customers in one week or less, versus 20 to 30 days from Asia. This helps drive transport costs down, increases speed to market, and reduces inventory cost. It also simplifies forecasting."

On July 1, a free trade pact that took the place of the North American Free Trade Agreement, the United States-Mexico-Canada Agreement, went into effect. What effect could it have on intermodal traffic between the three countries? Most experts interviewed said that the impacts are clear.

"We’ve already seen some developments since July 1," Wilkerson said. "KCSM announced a new railroad bridge that will expand cross-border capacity in the Laredo gateway. Ferromex is investing in a new bonded facility in Chihuahua to help the fluidity of the border crossing in the El Paso gateway. These are positive developments for intermodal business."

"Another thing we’re seeing is the digitization of the customs clearance process, which will make our world much easier," he continued. "The switch to digital eliminates the need for manual running of paper documents and makes the entire process more efficient."

Kansas City Southern’s spokeswoman C. Doniele Carson said that the USMCA will drive more trade between the three countries, with intermodal being an important piece of the puzzle — specifically where finished autos are required to have a great percentage of parts from the three member countries versus imports from overseas.

"The proof will be in follow-up investment needed to improve actual transportation infrastructure and facilitate trade on the U.S.-Mexico border," he stated. "It may become easier to process goods through Customs under the United States-Mexico-Canada Agreement, but actual transportation is another matter. Without investment in facilities and people needed to accommodate expanding U.S.-Mexico trade at or near the Mexican border, shipments will continue to face costly transportation delays in times of peak demand and disruption at the border itself."

Abecassis added that USMCA should help protect the volumes that currently exist between the three countries while providing "much needed clarity, stability and ease to moving goods."

"We [at CN] believe that over time we would see an increase in near-shoring activity to Mexico, which would increase the demand for intermodal," he said. "However, the pandemic has affected that, and while nearshoring of some products are likely, the volumes from the Asian rim countries will likely remain prevalent on the short and medium term."

"At this stage we do not anticipate that USMCA will have a major impact on trade volumes given the tariffs on most goods have been rolled over from the original NAFTA," he explained. "The USMCA included some measures in the customs and trade facilitation chapter that should help to facilitate greater ease of traffic flows."

Regarding if there are any current trends that give an indication as to what the future holds for cross-border intermodal traffic between America and the other North American countries, Agnew said that the Future Borders Coalition, which is comprised of bi-national organizations with a vested interest in advancing the efficiency and security of the Canada–U.S. border, is working on pilot projects to also facilitate greater border movement.

"The long-term impact of COVID-19 will also be a key factor influencing the border and what happens in terms of future priorities," he said.

Anchustegui said one trend he’s witnessed in Mexico is an increased shift in methods of goods transport.

"I think one trend in our country, we were an all OTR company but changed our way of thinking to intermodal. Right now, we see bigger year-to-year growth from our intermodal division than our logistics and OTR. That is a huge flag for us to continue to invest in intermodal," he said.

Wilkerson added that XPO is also seeing more nearshoring, due to both the pandemic and regulatory changes, and that the company anticipates the trend continuing.

"We expect the intermodal industry to see volume and market share growth as cross-border freight movement becomes more efficient," he remarked. "Companies want to move their production closer to the end consumer. That creates additional transportation needs. That will benefit the intermodal market."

Additionally, as the pandemic has eased, Wilkerson explained, there’s been a surge of import demand into the U.S. West Coast ports.

"That has created congestion, leading to trucking shortages and rate increases both inland and on water," he said.

"Companies are looking for alternative ports in both Canada and Mexico. The Port of Prince Rupert in Canada has seen an increase in demand, and there has been continued investment in steamship line service to the Port of Lazaro Cardenas, which provides an additional gateway into the U.S."

"While the future is uncertain, it does appear intermodal traffic will remain a key element of cross-border transportation in North America," he added. "In a lot of ways, intermodal is having its moment in the sun."