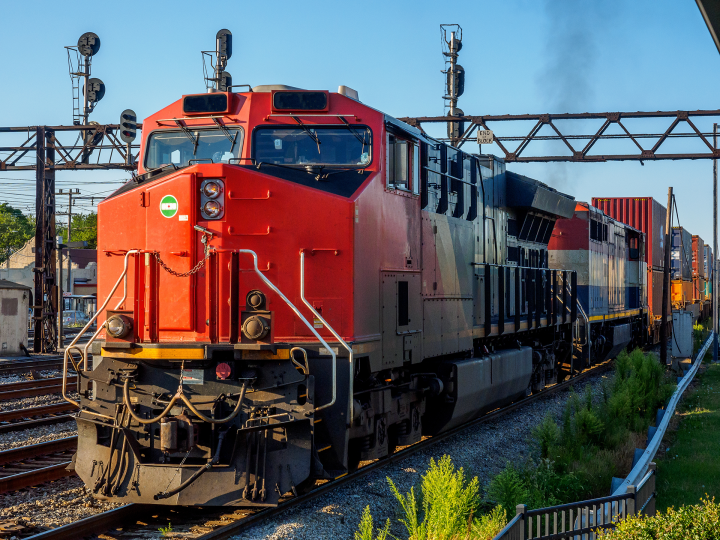 Some intermodal services in the U.S. are continuing to be closely scrutinized with the wider application of precision scheduled railroading, PSR, with the long-term goals of growing volume, implementing more reliable service and lowering costs.

To gauge the potential and further explore the potential for the interaction of PSR and intermodal, several experts were asked by Intermodal Insights for their assessment of where the process stands today.

One of them was Oliver Wyman Principal Adriene Bailey, who provided broad perspective about the current and future intermodal picture.

"Railroads have been on a journey to achieve truly scheduled operations for many years," she said, specifically crediting PSR to the late E. Hunter Harrison, CEO at CSX, as well as both Canadian railroads.

"Intermodal has yet to reach its full capacity for service reliability, growth and profitability. It will require substantial changes in both operating and commercial thinking and processes to get there and each rail will take its own path based on its own unique circumstances," she said.

Bailey added that the philosophy that underlies scheduled operations "actually puts customers and service at the center," leading to better service and lower overall railroad costs.

"Making a step function change to get there fast requires some big process changes simultaneously with big mindset changes," she said, with pain coming before gain because of intermodal’s status as the railroads’ most service-sensitive and competitive traffic segment.

Lee Clair, managing partner at Transportation and Logistics Advisors, emphasized the differences between intermodal and carload traffic, and the opportunities that emerge once scheduled railroading is achieved, such as reduced delays and the ability to offer new services.

"There are notable differences between PSR’s impact on carload and intermodal traffic," he told Intermodal Insights. "Before PSR, carload trains didn’t leave until they were full, while intermodal trains always have run on schedules."

"Intermodal provides more value-added service for the railroads than carload freight, which creates the prospect of improved returns and profitability," he explained, opening the door to improved profitability and free cash flow.

The PSR implementation process involves more than just the railroads. Another key is cooperation.

"Customers and railroads can work together with dray, equipment and terminal stakeholders collaboratively to further reduce cost and friction in the network that slows velocity, increases costs and reduces service," Bailey said.

Clair made another key point, saying it was important to note that PSR implementation is a gradual process that is continually evolving, and is done on an origin/destination pair and route by route basis.

Ron Sucik, president of RSE Consulting, believes the narrative relating to PSR and the intermodal environment has thus far had an overemphasis on cost savings rather than increasing volume.

"Someone has to ask the question, what is best for the environment ... fast efficient service that is cost positive or a cost friendly service removing trucks from the highway but at a less proficient cost savings benefit to the operating ratios," he said. "Why not help the environment now and increase that rail intermodal traffic?"

Three U.S. railroads that are in various stages of implementing their own approaches to PSR offered recent assessments of where they are in the process.

"We have also begun the process of clean sheeting our intermodal terminals and preparing for the third phase of TOP21, which remodels all traffic for additional opportunities," Norfolk Southern Chief Operating Officer Michael Wheeler said, speaking on an investor conference call. NS Chief Marketing Officer Alan Shaw emphasized the potential for intermodal by noting that revenue rose 18% year-over-year in 2018, on top of an 11% gain in 2017 over 2016.

“The [PSR] benefit to intermodal is that the improvement of on-time performance enables improved service to our customers and improves our company dray fleet efficiency.”
James Filter
Schneider

"Both of those I think should be positive for us to get back on the path of growing domestic intermodal. That still needs to also occur in the context of truck capacity getting right-sized," Vena added.

Mark Wallace, executive vice president of sales and marketing at CSX, said the railroad has ample capacity to grow intermodal business after completing steps to streamline the business to make it more efficient.

Canadian National is the sole railroad which has had long term volume growth for carload and intermodal freight alike, Clair said, because it was the first among the largest North American railroads to implement PSR. The process began 20 years ago when Harrison became that railroad’s chief operating officer.

Nearly all of CN’s volume growth, Clair said, has been driven by intermodal, noting that the growth was achieved by having intermodal gain share without taking much freight from competitor Canadian Pacific, another railroad that is farther along in PSR implementation than the U.S. railroads.

"Look at them [CN and CP] as a model," Clair said. "Other railroads will follow that growth pattern when it makes sense for them."

From the motor carrier’s standpoint, James Filter, senior vice president and general manager of Schneider’s Intermodal Division, said, "PSR is a popular topic because it has been a dramatic change, both in a reduction in services and an increase in service that changes the way that intermodal operates.

"The benefit to intermodal is that the improvement of on-time performance enables improved service to our customers and improves our company dray fleet efficiency, despite an increase in length of dray," he stated.

Filter also was encouraged by implementation efforts, saying "I believe that we are very close to seeing networks expand. However, I expect that changes will be scrutinized to ensure that incremental revenue will be realized and that network performance is not diluted."

There are a few signs of new market development after PSR is in place and working as desired.

One is CN’s creation of two new terminals for single customers in Wisconsin on its main line between British Columbia and Chicago, Clair said.

"Those new terminals were created at dramatically lower capital investments than facilities operated under the traditional intermodal model," he explained. "Also, because of the ability for trains to drop off and pick up loads at the new terminals while en route between the larger markets the new services had minimal impact on the through train service."

CP has added services, and CSX has repurposed an Ohio facility to expand logistics activity. CSX plans to add a new North Carolina terminal next year.

As PSR develops further, more opportunities could develop for new services and routes for intermodal traffic by mixing that freight with carload shipments, Bailey and Clair said.

"There are solid reasons for small intermodal lanes driving a dominant schedule on a mixed train," Bailey said. "Some international blocks provide the same opportunity. The critical aspect of these services is reliability — which is also important for merchandise traffic and contributes to lowering the overall cost of railroad operations."

Clair also noted that new markets for mixed carload and intermodal trains won’t necessarily be ones that have recently been cut back by U.S. railroads due to lower volumes.

Those recent reductions are consistent with the long-standing process of shuttering smaller terminals and concentrating the capacity for the long-haul high-volume markets, Clair said.

For example, Burlington Northern Santa Fe decades ago was very successful in reducing service to smaller markets and reallocating their investments serving the busiest and longest haul routes, such as Los Angeles-Chicago, Clair said.