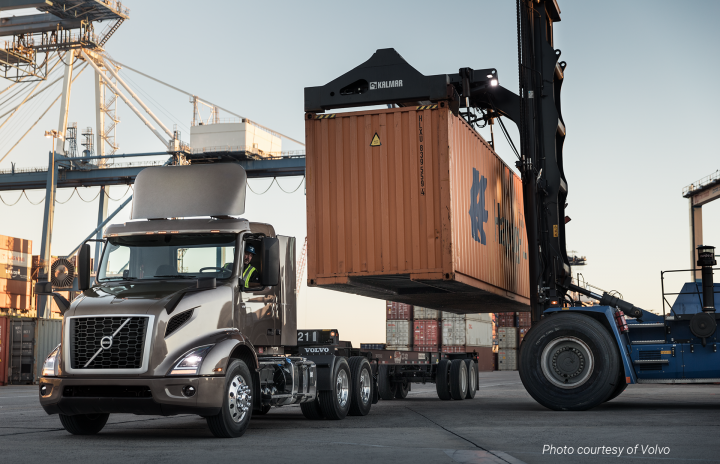 The movement toward eventually requiring zero emissions (ZE) or near-zero emissions (NZE) on all drayage trucks and cargo handling equipment in Southern California is focusing greater attention on how those goals, which fundamentally affect intermodal transportation, can be achieved.

The updated San Pedro Bay Ports Clean Air Action Plan, approved by the governing boards of the Ports of Los Angeles and Long Beach, calls for zero emissions for all cargo handling equipment by 2030 and for drayage trucks by 2035. The deadline includes the proviso for motor carriers that near-zero emissions equipment may be used in the intervening years until zero emissions drayage equipment is feasible. Since 2005, when plans to reduce emissions first were announced, port-related air pollution emissions in San Pedro Bay have dropped 87 percent for diesel particulate matter, 58 percent for nitrogen oxides and 97 percent for sulfur oxides, according to the ports' data.

"We have set aggressive goals. The ports are committed to working with our industry partners to continue reduction of emissions," said a joint statement by the ports sent to Intermodal Insights. The ports' statement estimated the cost of zero emissions technology at several billion dollars each for the replacement of cargo handling equipment and drayage trucks, contemplating investment from both industry and "a great deal of public grant funding."

Intermodal interests offered a variety of perspectives on the ports' goals. Mark McKendry, vice president of North American intermodal for NFI Industries, was optimistic. "The goal of NZE transitioning into ZE for the LA and LB ports is aggressive, but achievable by 2035. Intermodal is the most logical test bed for NZE/ZE implementation," said McKendry.

Short haul moves with such vehicles are widely supported by government agencies that can help to address infrastructure and return on investment questions, he said.

"Incentives like grants and a commitment to an electrified infrastructure for Class 8 trucks complement the existing natural gas infrastructure and offer a short-term, medium-term and long-term ability to get our industry to ZE trucks," McKendry said. "ZE technology and the economic incentives just aren't there yet, but there is a strong case for NZE being within reach."

NFI has made and will continue to make investments in renewable trucks, he said, because it's "the right course of action" and for practical reasons relating to rate penalties on non-compliant trucks entering LA/LB terminals, he believes. The requirement to electrify should hasten the development of infrastructure and manufacturing capabilities.

"The technology continues to improve with each iteration, so it is only a matter of time before the 'cost-benefit' [for electric trucks] starts to make sense even for small-to-medium sized trucking fleets," he added.

The California Trucking Association and the Harbor Trucking Association outlined their joint stance on the ZE and NZE proposal in early 2019 comments submitted in response to a draft feasibility assessment for drayage trucks that was prepared for the ports by consulting firms Gladstein Neandross and Associates and Tetra Tech.

The trucking groups' comments noted that the U.S. Environmental Protection Agency is developing a nationwide approach to new engine emissions standards known as the Cleaner Truck Initiative. The details are expected to be published in a proposed rule next year, with the earliest feasible establishment of a standard in the 2024 model year.

"In light of the Cleaner Truck Initiative, we would recommend the ports reconsider the realistic timeline for the promulgation of clear, mandatory nitrogen oxide engine emission standards below the 2010 EPA model year," the trucking groups' filing said.

"The HTA is committed to cleaner modes of transportation. This is highlighted by our partnership with ultra-low and zero emissions OEMs and the fact that our members have already reserved hundreds of vehicles in the NZE and ZE categories," HTA Executive Director Weston Labar told Insights.

He also noted concerns such as the lack of a regulatory standard to define what constitutes an NZE vehicle.

"There is a lot of work to be done before anyone can say we are ready to transition fleets from diesel and natural gas technology to replacement technology, such as electric," LaBar said.

The consultants' assessment report, which assessed technical advances between 2018 and 2021, found that less than 1 percent of drayage trucks met ZE/NZE criteria today. It also outlined extensive efforts by truck makers to develop technology to meet those goals.

"OEMs have significantly accelerated their efforts to develop and commercialize ZE and NZE Class 8 trucks suitable for drayage," the report said. "Early commercial and pre-commercial demonstrations are now underway that are expected to play a critical role to expedite substantial commercialization."

The report assessed commercial, technical, operational, infrastructure and economic factors. ZE battery and hydrogen fuel cell electric technology were evaluated, along with NZE diesel and natural gas-powered trucks as well as hybrids with electric and any internal combustion fuel.

Those technologies first were evaluated on commercial and technical factors. If the equipment type is or soon will meet those criteria, the study then assessed the operational, infrastructure and economic criteria.

Near-zero trucks powered by natural gas are an established technology offered by all major OEMs of Class 8 trucks, which are used in drayage service. ZE battery technology is in the early commercial launch stage, with a single operating vehicle, the report found. The other three fuel technologies aren't commercially available, and don't appear at this time to be on that path by 2021, the report said. 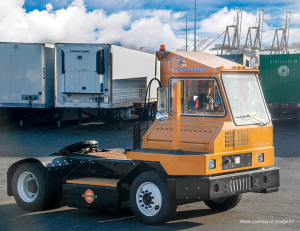 "The many demonstration programs that are already underway or planned will provide critical new information over the next two years," the report said. "Over the next three years, if at least some of these OEMs are able to achieve their stated goals … this could fundamentally improve the commercial availability and broad feasibility of ZE platforms in drayage trucking."

Mike Saxton, chief commercial officer for Orange EV, was upbeat about the ports' plan. "CAAP goals can be realized and it's critical to transition quickly," Saxton told Intermodal Insights. "The state has committed significant funds to help deploy the ZE solutions. The infrastructure funding programs are just now being put in place. The progress already made is quite remarkable."

He emphasized the need to redefine and simplify both government policy and commercial operational processes to encourage ZE vehicle deployment.

"The implementation could be simplified by allowing some vehicle specific charging equipment instead of creating a single standard, and pulling one container in port terminals instead of today's two box moves known as 'bomb carts,'" Saxton added.

The absence of firm emissions objectives and compliance dates also could hurt advancement by giving fleets and drivers the incentive to keep using diesel trucks that could eventually lose their economic value, he added.

Mike Roeth, executive director of the North American Council for Freight Efficiency, identified multiple reasons why intermodal moves will shift to electric or fuel cell powered trucks in the near future.

Low emissions diesel and natural gas trucks can't reach ZE goals, he said, and electric trucks' weight is about 50 percent lower than diesel. Electric vehicles' powertrains are simpler than diesel and no aftertreatment is needed.

Because many drayage trucks run on predictable routes, charging stations can be centrally located to support the duty cycles for intermodal.

Keith Brandis, vice president of product planning for Volvo Trucks North America, supported the goal of a ZE future and commended the ports for a balanced approach to that goal. He stressed the need for developing the "whole electric ecosystem," including charging, through many more additional investments and incentives.

"Investing in new equipment presents a challenge for short hauls," Brandis said. "Many of the companies involved in port transportation today cannot typically afford expensive technologies on new equipment. The market is currently very competitive with significant pressure to keep costs down. Intermodal benefits significantly from voluntary, financial incentives that encourage the replacement of older trucks with modern, clean technologies.

"The use of diesel technology presents various technical challenges surrounding the deployment of ZE/NZE vehicles in an intermodal setting. We are exploring various opportunities to combat the real-world challenges, including near-zero diesel, hybrid and fully electric solutions. In partnership with California's South Coast Air Quality Management District, Volvo Group has launched the Volvo LIGHTS (Low Impact Green Heavy Transport Solutions) project to introduce all-electric truck demonstrators in California this year, while commercializing them in North America in 2020."

Throughout 2019, the Ports of Los Angeles and Long Beach plan multiple public meetings to gain perspective on their updated CAAP, and amplify the findings of the 131-page, December 2018 draft feasibility assessment for drayage trucks.

Other interested parties submitted a variety of comments in early 2019 in response to the report.

Build Your Dreams, a maker of class 8 ZE trucks, praised the report's general finding of "strong support among industry stakeholders for the successful implementation of the CAAP goals."

BYD urged that the next feasibility study analyze the difference in benefits from local reductions in emissions from different engine and fuel platforms because "it would be inconsistent with the goals of the current CAAP to not address the environmental benefits and burdens of each engine type to the local San Pedro community."

The California Electric Transportation Coalition asserted that the draft assessment's methodology mischaracterizes the overall feasibility of battery-electric drayage trucks and urged that the initial conclusions about the five vehicle categories be revisited before future investment decisions are made.

"It's important for the ports to look at this draft assessment in the context of additional opportunities to electrify, other than the purchase of only commercial technologies," that trade association said.

The California Natural Gas Coalition questioned the feasibility conclusion about the adequacy of natural gas fueling stations in Southern California, contending that there already were dozens of such facilities in place.