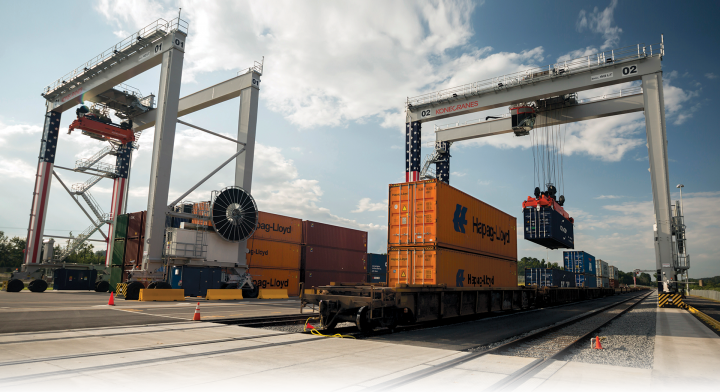 The concurrent rise of global trade and intermodal transportation has provided the impetus for the creation of a wide variety of facilities that are described as inland ports to leverage those opportunities.

To explore the different aspects of moving import and export cargo over the inland freight network, Intermodal Insights obtained more than a dozen perspectives. Libby Ogard, principal at consultant Prime Focus LLC, summed up the potential, and the complexity, of inland ports.

"Experimentation with domestic, international and multimodal inland ports is adding more access to the intermodal network. If done in a strategic way, that will add future growth opportunities for the industry for years to come," she told Insights.

"The success of inland ports depends on a number of factors, including understanding each mode’s economics, cost-effective access to intermodal containers and chassis, adequate traffic density and access to a geographically diverse, efficient route network."

"The warehouse and distribution real estate market continues to be extremely tight, with low levels of vacancy and new construction relatively in balance with leasing demand, which has remained strong – both on the coasts as well as in many inland logistics markets," said Aaron Ahlburn, managing director of industrial research at JLL.

At the same time, inland ports also are developing because of land constraints at existing seaports, as well as highway congestion near them, JLL officials said. "Having access to the right inland real estate options, in the right distribution markets, will help companies better manage both transportation and labor costs — and also provide shipping flexibility throughout the country to end customers," added Ahlburn.

The benefits [of inland ports] accrue to metropolitan areas, such as Columbus, Ohio, that have emerged as distribution hubs, said David Whitaker, chief commercial officer for the Columbus Regional Airport Authority.

"We already have a number of companies that have

relocated their distribution operations to Columbus as well as companies that have consolidated regional operations into one facility," he explained, given particular advantages from the city’s geographic location and available and suitable land access to rail, highway and air networks.

Changing trade conditions also are creating headaches for inland ports, she said. For example, the drop in soybean prices during 2018 has forced farmers and inland operators to look at new markets in Europe and Mexico. Those changes have disrupted established equipment flows within the freight network.

Rail-driven inland ports are growing in importance as retailers such as Amazon and Walmart use the facilities to support e-commerce, said Kevin Lhotak, president of Reliable Transportation Specialists.

The expansion is putting a renewed focus on efficiency and operations, he said. With railroad intermodal capacity under pressure, there can be delays due to trains that can’t enter terminals due to lack of track space.

Credentialing also is a concern, he said, as customs processes migrate to inland ports. He said as this practice is expanded, there is a chance that truck drivers at those locations in the Midwest could be required to obtain a Transportation Workers Identification Credential, or TWIC card, which now only is required at seaports.

Ron Faherty, president of motor carrier ARL, noted that chassis availability and condition still are an issue in some inland locations, though some leasing companies have made significant progress injecting new equipment inventory. In the current white-hot freight market, Faherty said, the focus is on day-to-day operations. Adding equipment is a gradual process that requires patience from all parties, emphasizing intermodal operators’ commitment to progress.

"People are making monumental efforts," he said. "The industry has made tremendous strides in the past couple of years. Everyone is aware of the problems, and is working on them."

For a railroad, Norfolk Southern Vice President Jeff Heller said, inland ports are helped by location on a route where the carrier already has intermodal operations, which can favorably influence cost structure and competition with over-the-road trucks.

"The way to grow more profitably is to leverage as much utility as you can out of a terminal before spending an investment dollar," Heller said. "With the rise of global imports, [marine] ports are handling increasingly larger containerships and cargo volumes. Having an inland port allows dense blocks of shipments to be quickly moved from the marine terminal to an inland port where they then can be processed for local distribution."

CSX spokesman Christopher Smith emphasized that rail shipments at marine ports are expected to grow by about 50 percent in the next five years, powered by improvements to the Suez and Panama Canals that are driving growth at Eastern ports.

"We are proud to partner on expansion projects that support freight flow efficiencies through direct rail access from inland ports to the affiliated [marine] port authorities," he said, citing projects in progress in Chatsworth, Georgia and Syracuse, New York.

From the marine port side, Beth Rooney, assistant director at the Port Authority of New York and New Jersey, said the words "inland port" should be considered in a broad context which isn’t related to location.

The differentiator is speed to cities such as Chicago and Cleveland, she believes. Because her port is the first U.S. call for most large container vessels, cargo can reach inland destinations in two days, which in some cases is sooner than the vessel reaches its second U.S. port. The port is encouraging inland intermodal moves by eventually tripling capacity at its ExpressRail, on-dock terminals to 1.5 million lifts annually.

On the West Coast, the Port of Oakland works with Shippers Transport Express to operate an inland facility in French Camp, California.

Belliny Sanchez, general manager of the French Camp facility, explained that import containers are consolidated into a free flow pile and moved through Oakland’s night gates to the inland depot. A similar operation is in place in Long Beach.

"This allows the BCOs, forwarders and truckers to arrange for pick up from the shipper's yard next day and shuttle to final destination, with empty return back to the depot," Sanchez said. That smooths import appointments, speeds deliveries, enhances chassis utilization and aids motor carriers by reducing delays.

Expansions are being considered in Southern California and elsewhere, Sanchez said. Port of Los Angeles spokesman Phillip Sanfield said, "There is potential for locations where the cost is competitive and the density of traffic can support the moves."

The Southeast has a tradition of inland ports, including locations in South Carolina, Virginia and Georgia.

The most recent facility to open is in Dillon, South Carolina, where retailer Harbor Freight Tools is the anchor for a facility located along a CSX rail line.

"Our growth wouldn’t be possible without a robust distribution and logistics network," said Karen Denne, a spokeswoman for Harbor Freight Tools, which began to develop a distribution center complex in the area nearly two decades ago. "The recent opening of Inland Port of Dillon, just a few miles away from our distribution operation, allows for increased accessibility to important markets up and down the East Coast and beyond."

The new operation has reduced cycle time and drayage costs from its Dillon complex that now services more than 500 stores in the Eastern U.S.

South Carolina Ports Authority spokeswoman Erin Dhand said the model that was used at the Dillon facility, as well as a facility opened in Greer in 2013, can be replicated.

"Inland ports are strong marketing tools and a driver of economic development in the regions in which they’re located because of the value they offer from an operational standpoint. Inland ports also offer a way to leverage truck capacity, which is a supply chain challenge in today’s market."

"We are continually assessing these operations to drive efficiency, see what is next and refine the product," Port of Virginia spokesman Joe Harris said. "To broaden the operation we seek those cargo owners, warehouses/distribution centers and manufacturers that appear to be in the best position to take advantage of what these facilities offer."