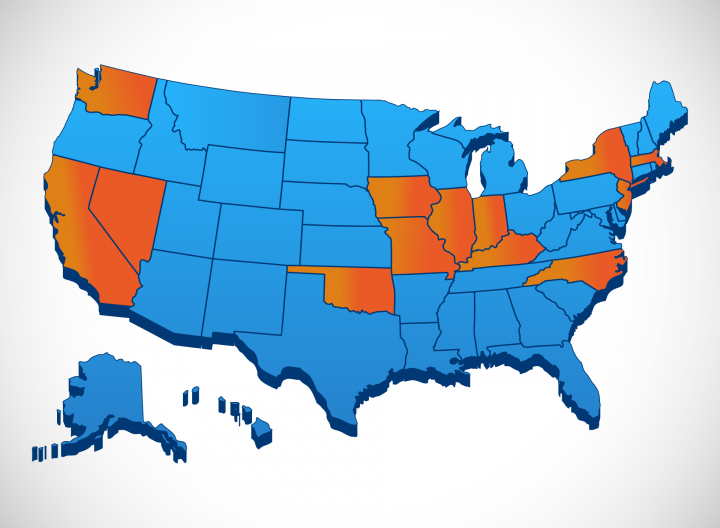 The controversy over independent contractor status continues to become much more widespread and complicated, engulfing regulators, legislators and the court system on both the federal and state levels.

Once limited to California, worker status issues have spread to New Jersey and elsewhere while at the same time continuing to be a hot topic in the state where cases have been litigated for more than a decade.

Kevin Lhotak, president of Reliable Transportation Specialists and chairman of IANA, summed up the issue’s importance in comments to Intermodal Insights.

"This [contractor] issue is surfacing in other Western states, specifically Washington state and recently in Nevada," said Joe Rajkovacz, director of government affairs and communications for the Western States Trucking Association. "Any state where the politics is decidedly ‘progressive’ is at risk of adopting laws handicapping the use of independent contractors."

New Jersey is one such hotbed.

"Everything that was going on in California is going on in New Jersey," said Dave Hensal, CEO of Eagle Systems, whose office is in a suburb about 15 miles west of New York. "I’m very concerned. Governor Phil Murphy wants New Jersey to be the next California, and he’s doing a pretty good job.

Eagle has been battling cases brought before the state’s labor regulators, and must counter a system which effectively forces businesses to challenge rulings individually, rather than working together.

Other efforts in New Jersey include legislation that would mandate payment of wages on an hourly basis, with overtime, and penalize employers that violate the law with fines and mandatory jail time.

As the issue spreads to other states, more attention is being focused on the importance of a federal approach and resolution.

Lhotak believes that the creation of a nationwide independent contractor coalition could establish a powerful voice that could be used to advocate on the federal level.

"The industry needs a fix on the federal level," Hensal said. "We need a consistent federal level process that we can all live by. Right now, each state has their own ideas."

Rajkovacz identified another potential step: petitioning the Federal Motor Carrier Safety Administration to alter some language that applies to leasing agreements to strengthen contractor protections. Alternatively, formal interpretation of leasing regulations on the federal level could be issued through regulatory guidance in a bid to discourage state officials from unfavorable rulings.

"We haven’t done a good job of messaging. The majority of intermodal drivers really want to be contractors. If they wanted to be company drivers, they could go down the street to someone else and get that job tomorrow."
Dave Hensal
Eagle Systems

In that letter, the DOL concluded that workers who provide services for a specific, unnamed company’s "virtual platform" aren’t employees. The letter cited a U.S. Supreme Court precedent, known as t

Through policy positions and other activities, IANA has supported the independent contractor model in a federal context as well as at the state level.

"The independent contractor model has proven itself over a long period of time to be economically viable and particularly well-suited to the needs of the intermodal industry," said Joni Casey, president and CEO of IANA. "We will continue to support that model in every venue and manner that we can."

Another focus of current attention is follow-up on the California Supreme Court’s 2018 ruling in the case formally known as Dynamex Operations West, Inc. v. Superior Court of Los Angeles.

In a blog post for IANA’s Intermodal Edge, attorney Greg Stefflre, co-founder of Rail Delivery Services, explained the importance of the case, which affected the contractor model by creating the ABC test to determine worker status, putting the burden of proving independent contractor status on the carrier.

"Employee status [using the ABC test] is virtually guaranteed if the worker and the business are performing the same service (e.g. freight delivery)," Stefflre wrote. "Subsequent trial court rulings interpreting Dynamex have found it to be fully retroactive."

The Dynamex case ruling has been challenged on several fronts.

The California Trucking Association is seeking a permanent injunction to bar the application of some Dynamex language, arguing that the case’s Prong B violates federal law. The Western States Trucking Association challenged the Dynamex ruling in a U.S. District Court, which rejected the group’s argument. That ruling is being appealed.

Speaking about the court process in general, Rajkovacz said, "I’m still very optimistic though that all this will ultimately be resolved in favor of the trucking industry since splits have developed in the federal appeals courts. At some point the U.S. Supreme Court is going to need to decide this once and for all in my opinion."

While the cases continue on multiple fronts, motor carriers can help themselves in several ways.

"We haven’t done a good job of messaging," Hensal said. "The majority of intermodal drivers really want to be contractors. If they wanted to be company drivers, they could go down the street to someone else and get that job tomorrow. Many of the drivers in New Jersey are immigrants — this is their American dream."

"Weak contracts can have loopholes," he explained. "We just went through a major overhaul of our independent contractor agreement to help eliminate potential issues. Motor carriers can expose themselves in contracts as well as not complying with federal leasing regulations."

Unless there is a third-party leasing company or separate entity in the contractor agreement, Lhotak said companies "are asking for trouble." Hensal agreed, saying "Lease/purchase can lock drivers into a non-sustainable economic condition."

Meanwhile, in California, Harbor Trucking Association CEO Weston LaBar said there is intense attention on Assembly Bill 5, which attempts in a legislative way to address the consequences of the Dynamex ruling.

"I'm still very optimistic though that all this will ultimately be resolved in favor of the trucking industry since splits have developed in the federal appeals courts. At some point the U.S. Supreme Court is going to need to decide this once and for all in my opinion."
Joe Rajkovacz
Western States Trucking Association

LaBar explained that Assembly Bill 5 could modify the Dynamex ruling and its treatment of contractor status. The issue is still being negotiated, with an ongoing dialogue between industry and organized labor that could recognize the legal validity of an owner-operator model, in which a trucker would need to have their own operating authority and obtain their own permits instead of being tied by a lease to a particular carrier.

To support that approach, his group created a program to assist drivers in obtaining necessary documents to be owner-operators. While it is difficult to measure how much success there has been in converting drivers from leasing deals to their own authority, LaBar said there are indications that hundreds of drivers made that change in the fourth quarter of 2018.

The HTA official said there is hope that once negotiations are done, the measure could move quickly through the state Senate and to the governor’s desk for signature. The timeline could be later this year, he said, though that is difficult to be definitive.

Rulings by the California Labor Commissioner also continue to be an issue, almost always resulting in workers being classified as employees.

The result, Stefflre wrote, is that contractor agreements in place for decades have been "eviscerated."