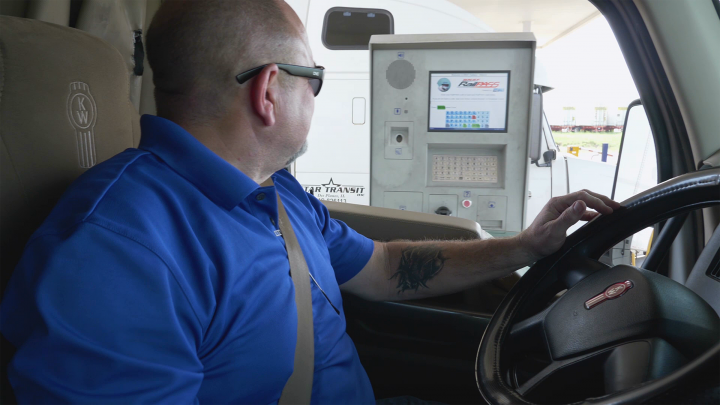 “Greater DVIR compliance can have a positive effect on overall equipment condition by increasing visibility to equipment defects,” said Ring.

“When a DVIR is filed, a process is set in motion at the facility to efficiently address the defect,” he added. Dave Hensal, president of Eagle Systems and head of the IANA Operations Committee’s Intermodal Chassis Driver Vehicle Inspection Reporting Standards Task Force, told Intermodal Insights, “We are starting to move the needle forward. There has been more talk about DVIRs. It’s difficult to see how much we moved the needle, however. Ultimately, we need statistics.”

Developing statistics could show definitively, for example, how often truckers are, or are not, being charged back for damage.

In the absence of recent statistics, DVIR submission frequency is difficult to gauge. Ring said that late last year, the railroad noted a “modest increase” in submissions, adding that the amount is still “extremely low.”

At one marine terminal with 6,000 daily truck moves, an operations executive reported never having seen a DVIR filed.

Hensal acknowledged it won’t be an easy process to increase DVIR submissions, saying that intermodal equipment providers and facility operators must be as involved as truckers to make the DVIR process work effectively.

The task force’s goal in 2018 is to increase involvement to move the process forward.

“Engagement benefits all,” Hensal said. “The IEPs need the help. They are willing to repair the chassis. If we can determine what needs to be fixed that will make their lives easier.”

There are several tools available for download on IANA’s website to facilitate the DVIR process, including a 5-minute video that has been viewed more than 500 times. Printable information cards/posters and a discussion guide are also available.

“If utilized consistently, the communications materials created by the task force should help drivers understand how DVIR reporting benefits them – safer road-worthy equipment, more efficient turn times and a better overall experience,” said Ring, stating a view shared by others interviewed by Insights.

Those actions have helped tremendously, Moore said, though challenges remain, including the fact that each terminal has its own rules, operations and maintenance practices.

“We maintain our gates with qualified inspectors, managers and data entry [systems] to quickly input the ins and outs which is essential to the operation and allows us to have an open line of communication with the shipping lines and equipment providers we serve,” Canales said. “Having an open line of communication with our clients helps us to properly plan for the day or days ahead,” particularly with respect to yard planning and daily inventory control.

Quick identification of bad order equipment helps to speed the repair process and provide roadworthy equipment sooner from the CY when IEPs require it, he added.

Tom Perdue, chief commercial officer for Ports America, stressed the importance of investment in berthing activity, such as water draft and raising bridges, in assuring that terminals have adequate space for operational fluidity.

“We have continued to invest with trading partners, port authorities and vessel operators,” he said. “As the [ocean carrier] alliances mature and the concentration of freight become more intense, the infrastructure challenge becomes obvious. It is an interesting time, to say the least.”

Challenges exist inside terminals, he said, which are being addressed by investments in larger cranes, straddle carriers and greater use of technology to improve visibility as well as more holistic use of equipment.

“We have a real commitment to trucking on turn times,” Perdue said. “We are doing a lot of upgrade technology at gates. At all major terminals we have almost completed work on appointment systems. We are doing better traffic control, preplanning and staging.”

One step being taken is a total production maintenance plan for yard tractors and cargo handling equipment to make service more predictable and prevent breakdowns.

In the Port of New York and New Jersey, the Port Newark Container Terminal is installing a gate system that is intended to cut truckers’ terminal time by 25 percent. It’s part of a $500 million upgrade extending until 2030 that was facilitated in part by bonds issued by the state of New Jersey. Other steps in the program include adding three super Panamax cranes, doubling on-dock rail capacity and adding cargo handling equipment.

Other ports, such as the Port of Virginia, have also been receiving the latest container handling equipment available, including six rail-mounted gantry cranes and eight shuttle trucks to enhance terminal operations.

At the Georgia Ports Authority, investments to increase capacity and throughput by adding truck gates, cranes and a PIN system that allows motor carriers to provide pickup and delivery information to drivers, facilitated a 23 percent increase in TEUs over three years between 2014 and 2017. More enhancements are in progress, including additional gates and a direct trucking link to I-95. On-dock rail lift capacity is set to double with the linking of two rail yards and construction of 18.5 miles of new track over a three-year period.

“Maintaining infrastructure throughout the terminal and gate complex ahead of demand will ensure our ability to grow along with customer needs,” Chief Operating Officer Ed McCarthy said.

Ed DeNike, president, SSA Containers, outlined a wide range of advancements that have been implemented to move trucks more efficiently through marine terminals, including improved technology at ingates and outgates to speed drivers’ trips. Effective use of available technology has reduced truckers’ total terminal time by 40 percent.

Another important move by SSA was changing longshore gang sizes so that break times and lunch periods are staggered. That allows the terminal to keep working steadily instead of stopping altogether during those times. Hours have been extended as well.

“We have a battery of people doing repairs,” he said, including 30 to 50 mechanics at some terminals whose sole job is fixing chassis. “It’s become very rare that truckers will get a chassis and will have to go to roadability [lines],” he said.

The Federal Motor Carrier Safety Administration has been active to ensure improved equipment condition, spokesman Duane DeBruyne told Insights, including roadability reviews and driver vehicle examinations to verify chassis condition and regulatory compliance. As a result, out-of-service rates on chassis after inspections have been reduced.

“FMCSA has been working with stakeholders, including IEPs, motor carriers, drivers, trade unions and third-party repair facilities to educate and inform industry of the importance of ensuring equipment is safe and systematically maintained,” DeBruyne said. “The DVIR process is an important tool.”

In Southern California, Harbor Trucking Association Executive Director Weston LaBar said there are definite indications that terminal throughput is being helped by equipment condition. That includes both an influx of new equipment and fewer red-tagged older chassis.

On the West Coast, the average turn time at the Ports of Los Angeles and Long Beach has dropped more than 20 percent since 2014 to about 75 or 80 minutes, HTA reports. That’s been achieved even as cargo totals rose about 10 percent through the nation’s largest port complex over the same period.

“There is still more work to be done,” he said, to address productivity and turn times in terminals. BNSF’s Ring spotlighted two particular steps the railroad is taking to address this issue.

“We are simplifying the DVIR question and eliminating the requirement of declaring one of the nine defect categories. Success in the pilot could lead to widespread implementation not only throughout BNSF’s intermodal hubs, but also throughout the industry,” Ring said.

Second, BNSF’s systemwide use of IANA’s Bad Order Equipment Status system is delivering improved visibility on chassis defects and repairs, which leads to improved throughput and a better experience for customers, Ring said. To reduce bad order equipment percentages, the railway provides a dedicated On Terminal Chassis Depot space for IEPs to do inspections and repairs. Use of the depot approach has resulted in a 40 percent reduction in flip events and improved equipment quality. Dedicated repair space also has reduced the injury exposure for workers, he added.

In addition to operational changes, inspections and investments, development of new technology is generating more attention elsewhere in the industry.

One recent technology innovation is E*DRAY, an initiative to enhance ocean terminal operations. It’s designed to standardize the block stow, flow stack and export street turn processes of containers for importers and exporters. The technology is operational in the Pacific Northwest, with the next scheduled expansion in Southern California and plans to add additional markets.

“E*DRAY’s innovation, technology and team have a new approach to increasing velocity through our gateway which is needed across the country,” said John Wolfe, CEO, Northwest Seaport Alliance.

Truckers and cargo owners use E*DRAY’s software to reconcile the equipment used.

“The improvement [in terminal throughput] over the last few years has been limited to user interface improvements, with a limited expansion of telematics capabilities and some industry acceptance of driver mobile apps,” said Ed McQuillan, president of Ashland Avenue Partners. “The ability for drivers to communicate to and with the terminal management system is by far the most significant improvement and should continue to be developed.”

Better use of technology can direct driver movements, identify congestion areas and assist drivers in locating units or chassis problems as well as self-checks for terminal entry and exit.

“There are some applications that have started to integrate the driver's device, but much more needs to be done,” he said, to maximize the value of technology used by drivers. In addition, he said that more benefits could be secured by evolving terminal management systems into scheduling systems.