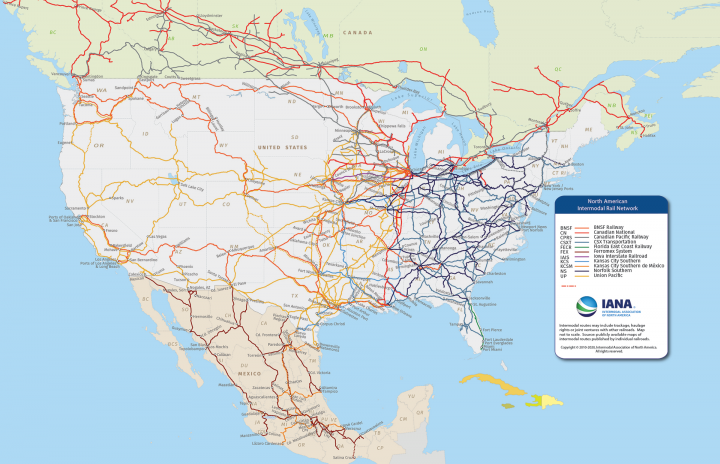 Rail network rationalization continues toward wider implementation in the North American intermodal industry. But as it continues to grow, there are still questions: what are railroads’ reasons for engaging in the practice, what has the impact been so far on the intermodal industry, and what could it be in the future?

As for the reasons why, Jim Filter, a senior vice president and the general manager of intermodal with transportation and logistics services company Schneider, said among them are that the railroads had some low volume lanes that were inefficient to operate.

"Not only are these lanes difficult to operate due to a lack of density, they can also slow down core, high volume lanes, degrading both the transit and the consistency of availability for all of the other freight that moves on their rails," he added.

As far as impacts, experts and stakeholders told Intermodal Insights that overall, the impacts are very positive.

"If implemented properly and with plenty of notice to customers, network rationalization can be a very positive action," Filter said. "The service improvements create a truck-like transit, giving shippers the speed and reliability they are looking for."

Union Pacific Railroad Vice President Jason Hess added that since railroads are among the most capital-intensive industries in the world, managing assets efficiently through network rationalization reduces costs and capital exposure.

"The end result is a better service product that competes effectively in the marketplace," he said.

Among the railroads engaging in rail network rationalization is Kansas City Southern, which has embraced the concept of Precision Scheduled Railroading, a system that includes freight trains operating on fixed schedules—much like passenger trains—rather than being dispatched whenever a sufficient number of loaded cars are available.

Other components of PSR’s framework include improving network routes and fluidity and working closely with rail customers to move cargo more efficiently.

Implementing PSR has resulted in such achievements as asset take-outs, she said, with KCS’s active locomotive fleet down 16 percent from fourth quarter 2018 and its system car fleet down 12 percent from the beginning of 2020.

"At KCS, our mantra is service begets growth," Carlson added. "Improved customer service driven by PSR not only facilitates KCS’s growth; it facilitates the growth of our customers and the intermodal supply chain."

A higher velocity of the network and the rationalizations on train starts have led to more cost-effective asset use, she said, resulting in among other things, a 5 percent increase in fuel efficiency year over year in fourth quarter 2019; a 54 percent decrease in road locomotive failures in fourth quarter 2019 compared to the same quarter the year before; and a 24 percent decrease in overtime.

Another railroad engaging in network rationalization is Union Pacific, where Vice President Jason Hess said that the railroad is implementing key tenants of PSR.

"The results to date include significant reductions in car dwell and increases in car trip plan compliance, which translate into improved asset efficiency," he said. "Greater asset efficiency, in turn, allows us to bring our network resources into optimal alignment with our customers’ transportation service requirements."

In the long term, he said Union Pacific expects its plan to yield positive effects "now and over the long term, as measured in its ability to execute at optimal levels" regardless of product line.

"These effects include everything from greater fluidity at our intermodal terminals to improved performance of our service product over the railroad," he explained.

Filter added that it’s clear that the benefits of network rationalization are being realized in the intermodal industry.

"Railroads that have already gone through lane rationalization have shown that there can be some great service results as an outcome," he said. "Consistency, capacity and reliability can be dramatically improved."

"If implemented properly and with plenty of notice to customers, network rationalization can be a very positive action. The service improvements create a truck-like transit, giving shippers the speed and reliability they are looking for."
Jim Filter
Schneider

"The ultimate benefit to our customers from these greater options and improved service is reduced inventory carrying costs and a higher degree of confidence in the reliable movement of their goods to destination," he remarked, adding that eliminating a lane, ramps or crosstown options creates the need for additional dray capacity.

Network rationalization could also have an effect on if and when mergers and acquisitions occur in the industry, according to the head of one major rail line.

In January, at the winter meeting of the Midwest Association of Rail Shippers, Canadian National Railway CEO Jean-Jacques Ruest said that since the majority of North American Class I railroads have adopted the principles of PSR, those railroads are less likely to merge.

No longer will less cost-efficient railroads buy more cost-efficient ones because PSR has already resulted in operating costs being maximized, and the increased efficiency from running a larger network with fewer resources is marginal, he said, adding that future mergers and acquisitions will be driven by different reasons than operating ratio.

Instead, Ruest said, look for railroads to acquire smaller players, such as short lines, thus adding more operational predictability, since in theory, the freight service should be better when railroads control more of the trip.

Norfolk Southern is also engaging in PSR, having begun initial planning in 2018.

"(PSR) will improve our network fluidity and velocity, reduce our circuitry and train miles, make our railroad more resilient, and give us greater capacity for growth," NS’s chief marketing officer, Alan Shaw, said. "We are engaged with our customers to talk about these changes and how we all can benefit from the opportunities that lie ahead as we fully implement the plan."

As part of its PSR plan, NS is balancing its network flows in order to allow the railroad to run fewer trains, use its operating assets more efficiently and create capacity for growth. Mike Wheeler, chief operating officer at NS, said that the network operating plan supports the five principles that are at the heart of the railroad: serving customers, managing assets, controlling costs, working safely and developing its people.

In a fourth quarter 2019 earnings press release, NS CEO James Squires stated that the railroad has achieved its initial PSR goals through close communication with customers to avoid disruptions and that it achieved an "all-time best delivery performance" during 2019.

"Our goal is to achieve mutually beneficial results that include reliable and consistent service as well as growth opportunities," Squires explained. "We want to grow our business and our customers’ business, all while operating more efficiently and safely."