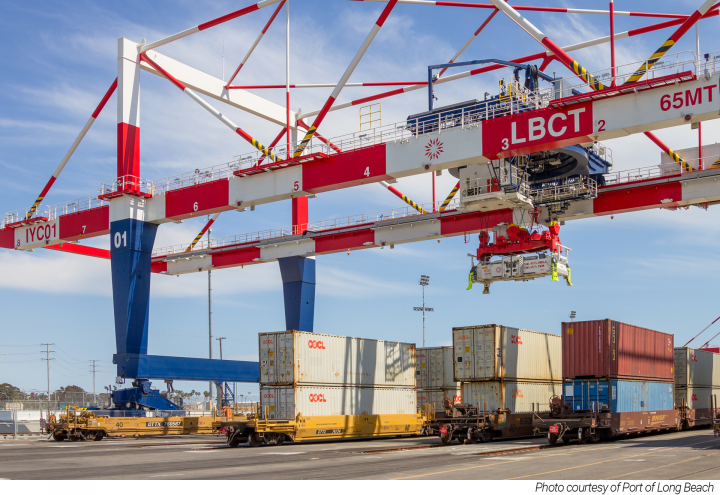 "If the share of containers moving in and out of ports by rail could be increased, that would provide a lot more congestion relief than efforts to increase cargo location visibility."
Walter Kemmsies
JLL

On-dock rail has played a role in intermodal moves for decades. But in the ever-expanding world of global trade and the resulting increase of competition for space in port terminals could — or should — that role change? What’s the future for on-dock rail, compared with other waterside land use options.

Intermodal Insights spoke with a variety of industry experts who offered their opinions on the topic.

On-dock rail should continue to play a major role in intermodal moves in the future, according to Duke Acors, general manager of intermodal services for the Georgia Ports Authority.

"Having on-dock rail enables you to get containers into railcars and moving towards the destined markets with higher velocity which translates to faster transit times from the time the vessels lands on the dock," Acors said.

"On-dock [rail] has proven to be a more efficient means of moving containers off of the port property and on to their inland destination," RSE Consulting President Ronald Sucik said. "The real advantage, regardless if loaded immediately or shortly thereafter is the fact that the container will not have to be released from the port and moved over the highway to the nearby rail facility. This of course eliminates adding to the already congested highway traffic on the road systems and reduces emissions that would have been emitted by the drayage trucks making the movement to and from the port."

JLL economist and chief strategist Walter Kemmsies said that with significant increases in demand for transload facilities near most major ports, technology — particularly when focused on improving visibility regarding location and status of a cargo owner’s container — may help reduce the congestion.

"But in the final analysis, more capacity is needed," he said. "If the share of containers moving in and out of ports by rail could be increased, that would provide a lot more congestion relief than efforts to increase cargo location visibility."

Another believer in on-dock rail growth is Jim Hertwig of Hertwig Transportation Consulting. Hertwig was president and CEO of Florida East Coast Railway until retiring in December 2017.

"I believe it should be increased to increase train density, reduce truck traffic on highways, reduce container lifts, reduce emissions and to serve more large inland logistics centers," he said.

Hertwig, who previously spent six years as president of CSX Intermodal and before that, nearly nine years as president of Landstar Logistics, one of the largest truckload carriers in North America, told Intermodal Insights that although growing on-dock is paramount, it’s also imperative that for it to succeed, it’s essential that stakeholders work together in a cohesive manner.

"If the water carriers, (shipping) alliances and BCOs don’t work together in building destination container density, then the railroads are forced to rework trains coming off on-dock facilities to create train density for inland linehaul movement," he explained.

"It’s critical that water carriers and alliances can give an accurate forecast of the number of available containers so rail carriers can match to the appropriate number of rail cars required for the on-dock train."

Michael Reilly, the director of intermodal services business development for the Northwest Seaport Alliance, which is comprised of the ports of Seattle and Tacoma in Washington state, said that both Class 1 railroads serving the ports — BNSF and Union Pacific — have said they prefer on-dock rail to near-dock rail terminals.

"On -dock should be increased when it makes sense," Reilly said. "That depends on the terminal layout, the terminal operator, the ocean carriers or alliances calling that terminal, are the vessels stowed to support IPI (interior point intermodal) moves, is there density to build full unit trains, will the Class 1s or short line providers support it."

Several seaports across the country have made significant commitments to investing in on-dock rail, including the Georgia Ports Authority, which operates deepwater ports in Savannah and Brunswick. The GPA is in the process of doubling its current on-dock lift capacity to one million lifts with a $220 million "mega rail" project that’s scheduled to be complete early in 2021.

"I think the challenge for ports will be to expand their on-dock capabilities within their current footprint, or find the right footprint for the on-dock model," Acors said.

The Port of Long Beach also has committed to increase its share of containers moved by on-dock rail, according to the port’s deputy executive director and COO, Noel Hacegaba.

As part of a $4 billion capital improvement plan, the POLB has committed about $1 billion to enhance on-dock rail utilization in the port over the next decade, something that’s necessary to accommodate anticipated cargo growth.

"According to our most recent cargo forecast, we will reach 18 million TEU in annual throughput by 2040. In 2018, we moved 8.1 million TEU with about 30% of that volume moving via on-dock rail," Hacegaba said. "Overall, we believe that growing on-dock rail capacity improves our operational excellence and strengthens our competitiveness."

On the other side of the country, the Port Authority of New York and New Jersey has expressly said that it’s trying to unseat the Port of Long Beach as America’s second-busiest seaport, with a big component in that plan being on-dock rail – specifically, the Port Authority’s recently completed ExpressRail Port Jersey facility, operated by GCT Bayonne.

The $149 million project, which was completed in mid-June, is the final piece of the Port of New York and New Jersey’s intermodal rail network, spanning facilities in Elizabeth, Newark and Staten Island.

Not surprisingly, the Port Authority said it is a strong proponent of on-dock rail service.

"You have to look at it from all angles and do what makes sense for all parties involved, and to ensure you have the most efficient set up for your footprint."
JoDuke Acors
Georgia Ports Authority

"On-dock — or near-dock — rail is the most efficient way of moving cargo over medium to long distances. Its role should be increased as long as it stays beneficial to the stakeholders involved," PANYNJ Deputy Director Bethann Rooney said. "This means a balance of investment by both ports and railroads and cooperation by both parties when designing and building facilities to meet demand in a timely manner. It also means being able to provide a consistent and reliable service in a timely manner and doing so at a competitive price."

Although on-dock facilities are generally operated on port-controlled land, the question remains as to who should control and decide whether land in a terminal is used for on-dock rail services or other intermodal activities.

The POLB’s Hacegaba said that marine terminal operators are in the best position to decide how their terminals should be operated, including their intermodal activities, but that a port authority is obligated to work closely with terminals to ensure that their operation is successful. 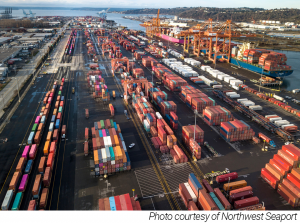 "For terminal enhancement and redevelopment projects, we work collaboratively with our terminals during the planning, permitting and construction phases," he said. "We also coordinate with our MTOs on everything from pavement repairs to terminal redevelopment projects to ensure the optimal arrangement. Certainly, we encourage the increase in on-dock rail use just as we also encourage the optimal configuration to speed truck movements."

The Georgia Ports Authority’s Acors said he thinks deciding whether land in a terminal is used for on-dock rail services or other intermodal activities should be a collective discussion with the major stakeholders involved.

"You have to look at it from all angles and do what makes sense for all parties involved, and to ensure you have the most efficient set up for your footprint," he stated. "That discussion can look different depending on if there is current on-dock rail when looking at expansion or not."

At New York-New Jersey, Rooney said that it should be a collaboration of stakeholders — port authorities, terminal operators, rail providers, etc. — to try and meet demand while wisely investing capital within finite space constraints.

"A reliable market forecast demand is essential to show demand for the long term," she said.

"We believe that it is and should be a collaborative effort between the port authority and the terminal operator," he said. "The ocean carriers and the Class 1s are major influencers along with BCOs and NVOs."

Kemmsies, however, has a different perspective.

Unless railroads, terminal operators at landlord ports, or cargo owners want to step up and pay for that, the decision will remain that of the port authority," he said. "Of course, there is consultation with stakeholders, but in the end, it is the port’s long-term strategic plan that should dictate what infrastructure is built within its jurisdiction."

Although most stakeholders and observers who gave their opinions to Insights agreed that expansion of on-dock rail is the correct path going forward, there was a range of opinions regarding what the best use of the on-dock model is, compared with short drays to/from nearby off-dock rail terminals.

"The best use of the on-dock model," the NWSA’s Reilly said, "is moving full unit trains up to 10,000 feet in length, versus having to set aside space and manage over 320 truck moves to or from nearby off dock rail terminals."

"The capacity needs generated by larger ships and the ocean carrier alliances, combined with anticipated cargo growth, will require an increase in both on-dock and off-dock rail utilization," he remarked.

Sucik said that unless a rail facility happens to be across the street from the entrance gate to the port facility, he believes that an on-dock operation is "always" the best operational choice.

"We believe that it is and should be a collaborative effort between the port authority and the terminal operator. The ocean carriers and the Class 1s are major influencers along with BCOs and NVOs."
Michael Reilly
Northwest Seaport Alliance

"Having said that," he commented, "you can never have the port facility be completely and only an on-dock rail operation because you will always have local deliveries and containers that will go to transloading facilities for product to be mixed and or reloaded into 53-foot domestic containers."

Kemmsies added that in his opinion, the best use of on-dock rail is supporting the growing number of inland ports within historically short distances, such as from Tacoma, Wash. to Portland, from Savannah to Gainesville, Georgia and from New Jersey to Syracuse NY.

"I expect to see many more such developments," he said, "and believe the rail industry’s focus on precision scheduling is oriented towards offering a speedier and more reliable international service that eventually will lead to the same for domestic long-haul intermodal."