CONTRACTOR STATUS BATTLES HEAT UP, MAY SPREAD TO MORE STATES 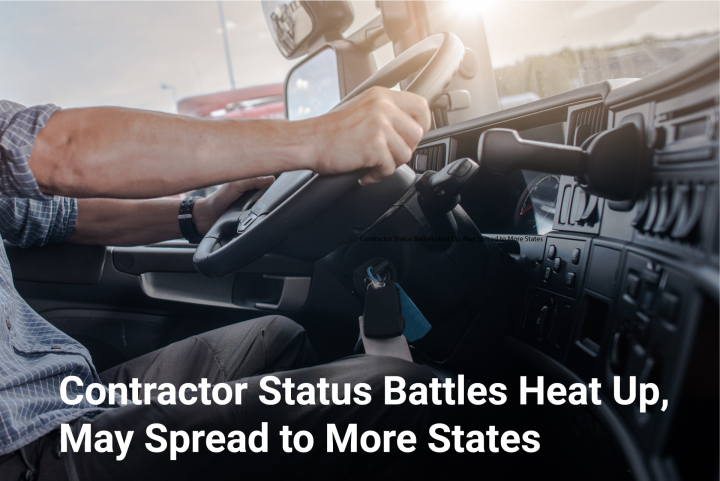 The stakes in the battle over retaining independent contractor status for truck drivers are continuing to escalate late in 2018, concentrated in California and New Jersey, with the real potential for the fight to expand to other states.

The classification issue in California is a "morass", said Marc Blubaugh, IANA general counsel and an attorney at Benesch, Friedlander, Coplan & Aronoff.

In a California Supreme Court case, a long-standing ruling known as the Borello test for determining driver classification for wage orders was replaced by the so-called ABC Test, which "essentially imposes a presumption that all workers are employees until and unless an employer can prove otherwise," he said.

"In other words, two very different legal standards will be used in California to evaluate the same worker’s status as employee or independent contractor."

To add to the complications, a new California law, SB 1402, was passed that makes shippers or their logistics companies liable for certain types of damages that arise in the future if a carrier is found to have not paid proper wages or expenses to its drivers.

"Trucking companies operating within [California] face one of the most hostile business climates in the nation," said Joe Rajkovacz, director of governmental affairs and communications for Western States Trucking Association. A potential solution, Rajkovacz said, is that the U.S. Department of Transportation pre-empts California’s meal and rest break rule. However, that could spark a legal challenge that winds up in Washington, DC.

"We hope that [outcome] happens since it would set up a case headed for the U.S. Supreme Court to once and for all settle this issue without any more political gamesmanship," Rajkovacz said.

The recent California election results could trigger additional changes affecting companies. Alex Cherin, executive director of the California Trucking Association’s Intermodal Conference, told Intermodal Insights that "CTA remains committed to advocating for best practices for our member companies, including strict compliance with statutory requirements. The association remains agnostic about the appropriate driver model because that is up to members to decide for themselves."

"We are under attack in New Jersey and in Washington state," said Dave Hensal, president of Eagle Systems, referring to efforts to undermine independent contractor status.

A particular, and ongoing, challenge is the fact that while the laws that govern driver status are meant to favor the independent contractor model, the interpretation by some regulators is different. For example, in New Jersey the 20-factor test, a common benchmark used to determine whether or not a worker is a contractor, was recently eliminated, said Hensal.

"There is a reason that over 80 percent of the companies engaged in port drayage use owner-operators," said Joni Casey, president and CEO of IANA, which for many years has been tracking independent contractor status issues on the state level. The latest information is available at www.intermodal.org/resource-center/government-affairs/legislative#stateleg.

"It is an efficient and effective business model for both motor carriers and contractors and affords people the ability to be an independent business man/woman, owning and operating your own asset (s) and deciding with who, when and where you do business," she said.

Jeff Bader, who heads the Bi-State Association of Motor Carriers, told Insights that the group’s members, who are intermodal truckers in New York and New Jersey, met recently with the New Jersey Department of Labor to address classification rulings that are unfavorable to independent contractor status.

Bader, who also is president of New Jersey-based Golden Carriers, counseled patience, saying "this is still a work in progress. We have to be optimistic. We had a very productive meeting with the commissioner and the staff. Whatever the outcome, we will live with it and abide by the rules."

Another front in the battle is legislative action.

"The type of proceedings in California are going to move to other parts of the country," Hensal said. "As an industry, we need to try to stem that tide."

The truck driver has become an easy target for those who seek to damage the contractor model, Lhotak said, because there are so many of them. It’s important to remember, he said, that there are a very large number of other workers, whether they are accountants, barbers or others, who are contractors. An important approach to take is to reach out to other groups that represent those contractors and win their support.

"If states are successful with truck drivers, everyone else could fall into that [employee] category," he said.

"Legislators are looking at it just from a union perspective," Hensal said. Hensal was referring to efforts by the Teamsters in multiple states to organize drivers so that they can be eligible for union membership. Those efforts have included initiatives engaging with state regulators as well as legislators.

Rajkovacz, who was a truck driver for three decades, said the union-backed initiatives are nothing more than a "Trojan Horse" attempt to enforce a quasi-form of "re-regulation" on the industry under the guise of "protecting the employees."

Weston LaBar, executive director of the Harbor Trucking Association, said at this year’s Intermodal EXPO that some HTA member companies who have converted to an employee driver model have lost a significant number of drivers that were independent contractors and have had difficulty competing in the market. These companies often have challenges procuring enough truck power because there are not enough drivers that want to be employees.

"The key things … are how we educate legislators and the general public about the importance of the intermodal drayage industry and the contractor model," Hensal said. "I don’t think many people understand," Hensal said.

"I don’t think the general public realizes that the cost of the goods will significantly go up if the [contractor] model shifts," Hensal said. "Operating expenses will go way up, and companies will leave the industry with a resulting loss of jobs."

Hensal, Blubaugh and others outlined a number of steps to legally protect contractor status and encourage drivers to maintain that relationship with carriers.

"The language of the independent contractor agreement being used must conform to the motor carrier’s actual practices. For example, having a well drafted agreement means nothing if the motor carrier is not actually performing chargebacks in the manner described in the agreement." Strategies that can be used include creating a "third party" company so that the contractor doesn’t have a direct relationship with the carrier, having a contractor obtaining their own operating authority or an approach that effectively allows a contractor to broker freight to his own separately established business.

"Regardless of whether a driver is a contractor or employee, effective communication is a critical element," said Duff Swain, president of Trincon Group, a motor carrier consulting firm, who highlighted the changing role of owner-operators. "It all still boils down to making drivers, owner operators or not, feel they are important and informed," he said. "People who work with drivers each day know the importance of communication. The change has to come in the management mindset – to proactive, not reactive."

"The model of the past was for the owner operator to go to a port or railroad terminal and find local agents with a following who could give them work," he told Insights. That model often included old trucks, and a lack of consistent service, which now is being replaced by larger, more efficient operations that are controlled by a company. The owner-operator in today’s market has to be a skilled small businessman, Swain said, with the expertise to manage money and a commitment to the enterprise, rather than simply running whenever and wherever they would like.

Rajkovacz believes that in the current ELD-driven environment, one important step will please drivers: don’t unnecessarily detain them.

"Drivers have families too and the only way to begin to make trucking attractive to younger workers is to figure out how to respect their desires for more home time coupled with making a decent living," he explained.

Hensal identified other key points, saying intermodal drivers prefer independent contractor status and noting a study of Southern California drivers commissioned by the Harbor Trucking Association that found 85 percent of them preferred not to be employees. "When you talk to the driver community, you find out this is their dream. They can work on their own schedule," Hensal said. "The independent contractor model is working because of the flow of freight," Hensal said, because drivers can run where the cargo is moving instead of being tied to one company as an employee.