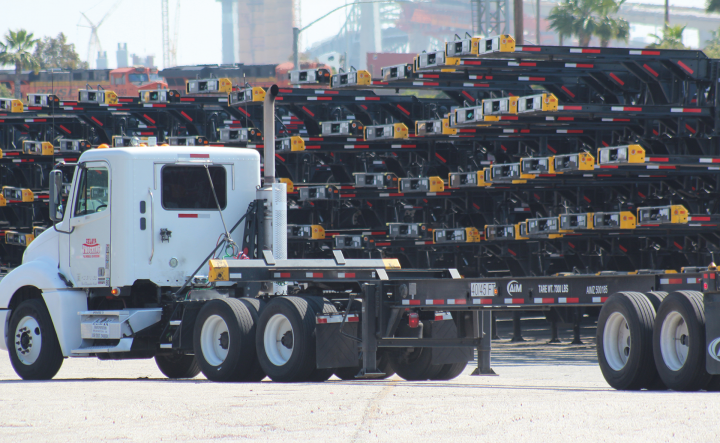 The intermodal chassis market’s ongoing evolution presents a promising but challenging blend of opportunities with common goals of enhanced efficiency through the increasing use of technology, creating additional pools and adding operational flexibility for motor carriers.

More than a dozen industry experts from all corners of the intermodal business, including intermodal equipment providers, stressed those goals in comments to Intermodal Insights and at IANA’s Operations and Maintenance Business Meeting in May.

"The most important thing is to drive efficiency," Direct ChassisLink CEO Bill Shea said, speaking at the Business Meeting. "We need to give customers the tools to be better able to manage assets on the street."

Shea noted that 51 percent of chassis leave one marine terminal and go back to a different one, creating a significant area of opportunity for improved efficiency.

"Our goal is to support our customers with the most efficient throughput of freight and to avoid multiple touches of a container," he told Insights. The key, he said, is to focus on improving efficiency "while meeting customer needs for a reliable and cost-effective product."

"IEPs have made significant progress," said Charlie Wellins, president of FlexiVan. "We have a way to move to the next phase in how we operate. There is still work we can do to eliminate duplication and give better service."

"Try to embrace all the technology you can," said Frank Sonzala, CEO of CIMC Intermodal Equipment. "The customer wants more information, safety and security."

C & K Trucking CEO Mike Burton stressed the importance of technology, too, particularly location-based technology. However, he emphasized there is still work to be done on resolving how to link the tractor with the chassis to gain maximum efficiency for both pieces of equipment, rather than one or the other.

Speakers at the Business Meeting outlined additional complexities that arise in the pursuit of greater overall efficiency.

Sal Ferrigno, vice president of SSA Marine, said he was "hard pressed to find anyone who doesn’t like the idea" of chassis availability at off-dock facilities near ports. Terminal operators like SSA are coping with increased volume and land costs that can reach $200,000 an acre.

“The entities that are paying for the use of the equipment should be the ones to make the choice [of chassis].”
Charlie Wellins
President, FlexiVan

However, Burton said the off-dock facilities weren’t as attractive to truckers because they can create additional drayage moves and terminal stops for motor carriers.

Experts focused many of their comments on pools.

From the ocean carrier side, Greg Tuthill, senior vice president of CMA CGM America, said the company would welcome any interoperability in chassis pools, and floated the concept of container pools.

Lovetro, a pool of pools participant with TRAC, advocates for a pool structure for the industry that is focused on consistent practices, rather than some existing operations that are hampered by inconsistent operational, maintenance, governance and repair practices among pool participants. He further noted the pool of pools structure in Southern California fits the latter mold because it is inefficient for both IEPs and terminal operators, though it has given motor carrier users interoperability that is beneficial to them.

Jon Poelma, Consolidated Chassis Management’s president, focused his comments on equipment quality improvements in its pool. That has taken the form of deploying additional, higher-quality assets with radial tires, LED lights and other equipment, both in pools and in equipment leased to truckers.

Motor carriers, including C & K, have emphasized the need for wider adoption of "open choice" or "trucker choice" models, in which truckers choose what chassis to use.

Dave Manning, who heads the North American Chassis Pool Cooperative, offered a working example of this model – the newly operational open choice pool started in the New York/New Jersey area by the trucker-owned enterprise in cooperation with FlexiVan.

FlexiVan is "a big supporter of open choice," Wellins said. "We are coming from a position where the entities that are paying for the use of the equipment should be the ones to make the choice [of chassis]."

Tioga Group partner Dan Smith explained that other key financial questions have to be addressed through an open choice model. In order for that model to work, he said, motor carriers will need the financial means to be able to acquire and provide multiple chassis per power unit in order to literally support containers left at shippers’ docks.

"That can be a high hurdle for smaller truckers on tight margins," Smith said. "That cost makes it risky to commit to long-term leases. At the same time, motor carriers have to plan for ocean freight surges that create an acute need for more chassis."

In addition, Smith said there still is a large supply of older chassis available, which reduces the incentive to buy new ones.

Eventually, he believes the chassis market will resemble over-the-road motor carriers’ approach with a combination of owned equipment for base load customers and a blend of short and long-term leases.

"Trucker choice is the ultimate goal," said Robert Loya, director of operations for CMI Transportation. He said the issue of who controls the chassis still can be troublesome.

B.J. Tarver, chief operating officer at Gulf Winds International, also said trucker choice was the top-level issue for the motor carrier, though the issue of efficiency in terminals is also important.

Steps that are needed, he said, include creating pools where they make sense and don’t exist today, such as in Dallas. On the other hand, he said pools don’t seem to be needed in Houston, where port officials encourage truckers to reuse chassis instead of swapping them out frequently.

Also noted was an emphasis on investment in new equipment.

"We have seen a number of new entrants into the international chassis market," Poelma said, citing companies such as Milestone and American Intermodal Management. At the same time, he said, motor carriers are increasingly acquiring chassis and signing long-term equipment leases.

Manning also noted benefits from the influx of new equipment investments by the trucker-owned cooperative and others.

Stuart James, vice president of sales at Hyundai Translead, said the growing opportunity in the chassis market has brought the equipment provider back into the intermodal sector.

"We like the [chassis] business now," James said, as its customers increasingly request installation of technology such as GPS. "We’d like to stay in it." He anticipates the market for 53-foot chassis will be stronger over the next several years, though eventually the 20-foot and 40-foot fleets will have to be renewed. "At some point, those poor devils [international chassis] won’t have any more life in them," he said.

For example, the term "bad order" can be subjective, in the sense that perceptions of whether a chassis is roadable can vary among drivers and the fact that the urgency to move a load may force the use of a chassis that otherwise would be red-tagged.

“Motor carriers have to plan for ocean freight surges that create an acute need for more chassis.”

Manning said there needs to be new incentives to maintain equipment condition quality in a pool structure, which remains an issue in the drive to create a chassis fleet with better, more modern equipment.

However, there were these positive indicators.

Darrell Ruban, a Federal Motor Carrier Safety Administration official, said at the IANA committee meetings that there has been a continued improvement in chassis condition, reflected in steadily decreasing out-of-service actions over the past several years.

Lovetro cited a few steps being taken to address equipment condition, including placing more surveyors in the field to identify where equipment repairs are needed. TRAC is also using a combination of rehabilitation and remanufacturing of chassis that covers tens of thousands of units. Other IEPs are making similar investments.