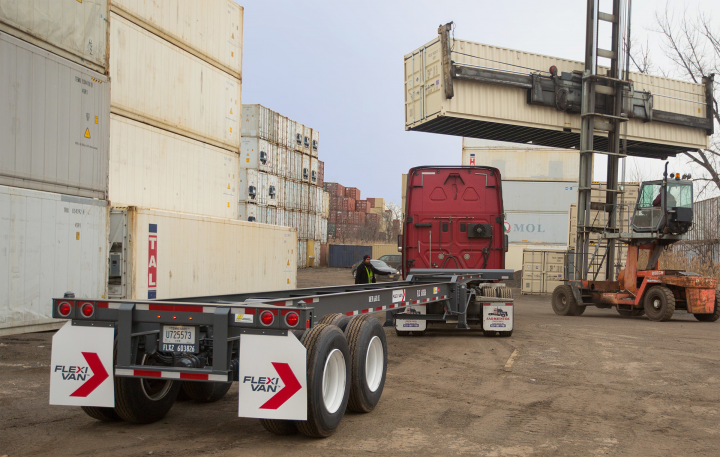 It’s been a busy five years since the far-reaching Transportation Research Board report about the intermodal chassis market was released. The report benchmarked how the equipment is provided, managed and maintained.

Since its 2012 publication, the transition away from ocean carrier chassis ownership is all but complete. Though statistics are scarce, there is ample anecdotal evidence that the roadable chassis fleet as a whole is newer, larger, in better condition and better utilized as older, lower quality equipment is being retired. Statistics maintained by IANA on the safety condition of chassis, based on FMCSA data, have shown a positive trend over the last few years in the safety performance of the equipment.

The TRB report’s assessments about the evolution of pools, terminal activities and customer expectations have turned out to be consistent with developments.

"Chassis models in the U.S. will likely continue to evolve toward pooling in the short to medium term as there is general stakeholder consensus that there are efficiency benefits to the supply of chassis from pools in one form or another," the report said. "Most ocean carriers will likely continue to want to divest their role in chassis supply and eventually exit the chassis business altogether."

"BCOs will continue to want adequate chassis supply and terms that are in line with their logistics operations," the TRB report predicted. "Terminals may prefer to minimize on-terminal chassis storage to what is necessary for efficiency in order to maximize their terminal capacity for container storage and operations."

Chassis pools have evolved in multiple locations, with different participants and organizational structures, amid a broad effort to enhance equipment utilization and manage costs.

carriers. He noted though that the structure maintained individual business rules, such as maintenance, for each IEP that limited the efficiency from the IEP’s standpoint.

The Consolidated Chassis Management pool, formed through the Ocean Carrier Equipment Management Association, has expanded geographical operations since the TRB report. An effort to form a New York/New Jersey area pool, with participation by all IEPs, hasn’t yet come to fruition. However, a pool created by FlexiVan and the North American Chassis Pool Cooperative began operations in April.

Premium equipment options have been offered, in addition to the general improvement in chassis condition. A definite trend toward grounded chassis has emerged, at least at marine terminals.

"Equipment is gradually being upgraded and we are seeing significant purchases of new equipment," he told Insights. "We have seen a number of new entrants into the international chassis market. This includes but is not limited to the North American Chassis Pool Cooperative, Milestone and American Intermodal Management."

"Motor carriers have taken on a number of long-term leases in addition to purchasing their own equipment," he added. "We have seen a number of new entrants into the international chassis market. This includes but is not limited to the North American Chassis Pool Cooperative, Milestone and American Intermodal Management."

"In 2017, we launched and currently operate 3 premium chassis pools at major intermodal locations and expect to expand these operations in the near future."

"It’s a misnomer to say that ocean lines are completely out of the chassis business," said Jason Hilsenbeck, president of LoadMatch, identifying a sticky issue in the provisioning process that is yet to be resolved. Actually, he said, some steamship lines remain very involved in the supply process by controlling who can use the assets through contract arrangements.

"The lines pulled out of the chassis business pretty quickly and there was not time for any system to emerge," said Dan Smith, a principal at consultant Tioga Group. Each ocean carrier took its own approach to divesting chassis on its own timetable, at a time when the lines were under intense financial pressure to trim unproductive and unprofitable activity such as chassis supply.

The result was "slow and uneven progress" in the ocean carrier portion of the chassis market, Smith said. While the lines were eager to sell the equipment, they wanted to retain guaranteed supply to move their freight. The leasing company buyers, in search of a base equipment supply, agreed to those terms. However, the truckers often couldn’t choose where to source the equipment.

Moore elaborated, underscoring the importance of a key issue that remains. "In addition to creating burdensome billing challenges, the number one lack of progress is the motor carrier’s opportunity to choose their equipment provider and contract accordingly," he said. For example, tens of thousands of containers are returning to different terminals than they were released from, resulting in a major problem with equipment disposition.

"Since the comprehensive report, the majority of ocean carriers no longer own marine chassis," said Ron Joseph, chief operating officer at Direct ChassisLink. "We expect the few that remain will exit chassis ownership in the near future. We have seen a few marine terminal operators prefer to have chassis located off of their terminals and there has been an increase in on-dock rail."

Dave Manning, who chairs the trucker-owned NACPC that began operations after the TRB report was released, identified the issue of chassis choice, favored by truckers, as a key factor in a transition that he said has "hit a wall."

"The chassis transition has slowed down considerably," he said, while noting that truckers’ issues with ocean carrier control of chassis sourcing applies to some steamship lines, but not all of them. "I would have thought there would be more trucker-provided wheels by now, through gray pools. Choice can be a motivating factor to continue the evolution."

Weston LaBar, executive director of the Harbor Trucking Association in Southern California, said the majority of its members believe chassis supply "is going to be more efficient when the trucker has control of what type of equipment they are using. If a trucker prefers a pool chassis, they want to be able to do that. Or, if they bring their own, they want that freedom."

The future of motor carrier participation in chassis provisioning was the only area where the TRB report missed the mark. While the authors predicted that truckers would resist a shift to greater ownership of equipment, there has been a push in the other direction.

"The intermodal chassis industry is evolving, and the market has changed quite a bit in the past several years," said Jeff Bader, president of the Association of Bi-State Motor Carriers in the New York area. "We've seen a trend towards motor carriers purchasing their own chassis and entering into long-term leasing agreements, in order to mitigate the changes we've been experiencing."

Suppliers also highlighted the changes made so far.

"We have seen a huge growth in the chassis market. The existing pool providers are growing their business, premium pool providers are expanding, and so is the ownership market," said Trevor Ash, vice president, sales and marketing at CIMC Intermodal Equipment.

Growth has occurred as domestic chassis customers shifted to owned chassis sourced from CIMC after the ocean carriers exited the leased equipment market, Ash said. On the marine side, both the pools and individual carriers are acquiring chassis at a pace greater than the replacement of older equipment.