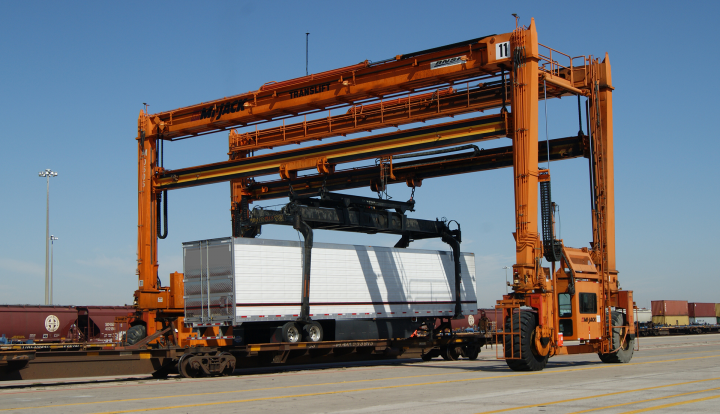 Future growth in intermodal trailer shipments may continue since solid freight market growth continues to outpace capacity, experts say, but questions remain about the long-term outlook for that equipment type.

Intermodal trailer shipments spiked in 2018, increasing nearly 15 percent in the first 10 months of the year compared with the same period last year and outpacing the 6 percent growth rate for intermodal as a whole, IANA statistics show. The rate of increase this year was more than double the 6.4 percent rise in trailer moves year over year in 2017.

"We do project trailer volume growth, though much slower, next year," TTX Vice President Pat Casey told Intermodal Insights. He cautioned that it is very difficult to forecast intermodal trailer volumes because of the wide swings in volume from year to year since 2000.

Since that year, intermodal trailer moves declined in 10 years, including a 23 percent drop in 2016 from 2015. On the other hand, year-to-year increases were recorded in six years and one was unchanged. From 2000 through 2017, intermodal trailer moves have dropped by about half as railroads increasingly have incentivized domestic container shipments to capitalize on favorable double-stack economics.

"Shippers were faced with shortages of equipment and looked to the trailer fleet to meet their demands this year," said Ron Sucik, president of RSE Consulting, who expects trailer shipments will remain strong in 2019 for multiple reasons.

"In addition to truck conversion from over-the-road, the trailer segment is also seeing the benefits from e-commerce growth," said Jason Hess, vice president – premium at Union Pacific Railroad. "We are seeing strong growth in [less than truckload] and parcel shipments where there is a link to e-commerce growth. Economic activity will drive trailer loads going forward and intermodal trailer loads are often a first step for customers to transition to containers."

During 2018, trailers have represented about 8 percent of intermodal volume.

The market for trailer shipments in particular and intermodal in general is underpinned by the fact that Americans have confidence in and feel good about the economy, which has stimulated consumer markets that drive freight demand, said Jeff Brashares, senior vice president at SunteckTTS.

Stuart James, vice president of sales at Hyundai Translead, also linked the strong trailer market to underlying freight demand. "Motor carriers are seeing excellent volume and improved rates and are reluctant to miss out on any revenue opportunity," James told Insights. "That has included increased use of intermodal."

"The much-discussed overall driver shortage which, combined with the impact of ELDs on drivers’ hours, means that carriers will get the load moved however they can," James added.

Larry Hall, executive vice president at Premier Trailer Leasing, also said that 2018 intermodal trailer markets reflect the shortage of truck drivers, which forces customers to seek alternatives to OTR service. "The driver shortage is real, and ELDs have exacerbated the problem," Hall said. "We are all trying to do more with less."

Trailer loads this year are being helped by several factors, Brashares said. They include easy comparisons to the disruptions during 2017 hurricanes, driver issues related to the shortage and turnover that continue to drive freight to railroads. The trailer market also is being affected by CSX’s intermodal network modifications, Brashares added.

The trailer market will be helped in 2019 by the fact that railroads as a group appear to be focused on issues other than intermodal market share gains, and appear to be content with maintaining markets that they have, Sucik said.

Brashares noted that economists expect that demand should remain strong in the short-term, though there could be headwinds from tariff disputes or oil market disruptions.

While James also believes freight volume will "hold up well throughout 2019," barring some unforeseen event, he questioned how long it will be before railroads will move further to pick and choose loads based on equipment type and raise rates for trailer moves, since containers’ economics are more attractive.

"The freight will still move, and the revenue will still be earned, but the possibility exists that trailer volume will show a decrease," James added.

Others also questioned how long the trailer volume increases will last.

Matt Parry, senior vice president of logistics at Werner Enterprises, said he believes the growth pace in trailer shipments is unlikely to continue at the same pace as 2017 and 2018 as more container capacity becomes available.

Over the longer term, Sucik is confident that the economics of double-stack service and rising imports that move in containers will diminish trailer freight levels.

One future question that has to be considered, Sucik added, is the potential that LTL freight moving in trailers rises faster than the dropoff in truckload carriers’ volume using that equipment.

“Shippers were faced with shortages of equipment and looked to the trailer fleet to meet their demands this year.”
Ron Sucik
RSE Consulting

Improvements in service quality and industry equipment utilization also could lead to reduced use of trailers that were pressed into service this year as demand surged.

"If shippers and consignees unloaded ALL their boxes in two days instead of two weeks, think of the additional equipment added to the marketplace without buying one additional box," Brashares observed, while making the same point about the benefits of better on-time rail service.

Like others, Sucik believes the overall freight market will benefit from improvements in velocity, reduced dwell time and faster unloading of shipments.

"Be sure deliveries are handled in a quick and timely manner so the drayage or truck drivers can get in and out of terminals quicker and back on the road," said Sucik. "I know this is not a novel idea, but needs to be readdressed at this time."

Parry said he doubts that the volume surge in trailer moves over the past two years will lead to construction of more equipment specifically for the intermodal market.

"Trailers remain a higher cost alternative to containers. As rail service and equipment utility improve, container service will continue to gain share back," Parry said. "Railroads use different rail cars for trailers vs. containers. For them to improve utilization/service, they need to continue to simplify their solutions."

There are definite signs of growing interest on the part of motor carriers who want the ability to use intermodal when they want to do so.

James also noted that container-related efficiencies probably won’t spark any interest for building trailers solely for intermodal. Instead, the focus will be on units that comply with the Association of American Railroads’ "occasional use" specifications. Hall said lessors seek to offer customers maximum flexibility in utilizing equipment.

"Nearly 40 percent of our over-the-road van fleet is rail compatible. A lot of what we build is equipped to go on the rail," Hall said, including a unit number for use in rail information technology systems.

"The vast majority of our customers are probably going to try to put their trailers on the rail at some point."
Bill Wahlin
Executive Vice President, Stoughton Trailers LLC.

The percentage of customers that are specing lift pads on their new equipment has increased modestly since the end of 2016, and now stands at between 30 and 40 percent, Wahlin added.

With freight demand strong, James does not believe there is a hidden pool of underutilized equipment to emerge when shortages arise. As a result, the only option to add capacity is to build more equipment, which takes time since trailer manufacturers are at capacity.

"Demand for trailers of all types is continuing to grow," Wahlin said. "We are expecting continued growth in 2019, but perhaps a little less than 2018. We expect 2019 to be another good year."

Equipment constraints will ease because trailer manufacturing is surging, Hall believes, though that fact won’t fix an important underlying fact.

"The real issue is how we can maximize driver time, thereby maximizing company revenue. This will require an even greater push into drop and hook, trailer pools, etc.," Hall believes.